To vote in our polls about event times and types, click here.
To suggest an event for the Events Team to create and host, keep reading.

This page is for Event suggestions from the community. If a suggestion is left here, the ET will be notified on their Personal Watchlists and every member will have a chance to review it. ET members are under no obligation to comment or use your Event idea however, but we will try our hardest to use your suggestions! Please only suggest to us unique events. Minigames and bossing events are not unique, and we will do them in the future.

To submit your idea, click here and fill out the preloaded text. Fill in everything in parentheses.

To comment on a suggestion, start your comment off with a colon (:), this makes an indent to show us you are commenting. After your comment, type "~~~~", which will function as your signature to identify who made what comment.

What I'm proposing is getting a group of people together to have a fun time at the Trouble Brewing minigame.

Since Invention is coming out on the 25th and will be a comp requirement on launch, I'd imagine a fair few people are finishing off requirements to get their cape, and seeing as this minigame is often pretty dead we can expect a decent amount of people to come along to get their music tracks.  Thank you for reading my idea - please leave a comment by editing this post and commenting below if you are interested in coming, I have some friends already willing to come along!

Everyone goes to the Grand Exchange in world 2 and we put down a few Egyptian dance boxes and we all dance along to it just for fun, and after 15 minutes of that we all gear up in iron armour and weapons and hop world to a world picked by the host of the event. Then we all use the Wilderness lever and fight in iron armour for fun. There will be a risk of pkers so only bring iron equipment and affordable food.

Teams of 5 goes to different dungeoneering floors and level up their skills! Requires Teamwork E.g. with cooking food or smithing armour for your teammates.

Loosely based on this game; the event would take place over a weekend, and work as follows:

What about when players never log in? They deny their assassins any opportunity to kill them, while their assassins may spend a lot of time online, increasing the chance of becoming a victim. Also the assigned victims of the players who never log in have no risk whatsoever. It may be necessary to limit the time span of the event and make everyone join an fc so that online status can be monitored more closely. Players shouldn't necessarily be disqualified for random disconnects, but if they log out for more than, say, 5 minutes, then it's the same as if they're killed. It's just an idea. --Saftzie (talk) 08:37, October 24, 2011 (UTC)

I would say that players would have to log in to the cc/fc for a certain period of the day to qualify to be taking part, say that everyone would agree to be present for 4 hours each day at a minimum. We'd also have to consider peoples time zones, probably having people giving this sort of info to sign up and then pairing them like that. However, I really like this idea, and would say it could be worked out to work for us. --

The game is similar to regular hide and seek, hiders would take their vexilliums and plant them in various places in Geilnor. The challenge is to find the most vexilliums. The verification process would involve the finder private messaging the player who planted it (although all hiders would disperse at the beginning, only 5-15, depending on how many hiders we have, would actually leave vexes.). If the player is correct, they may begin searching for others while the game masters (owners of the friend chats) will announce the find. After 10-15 minutes all players would return to start point and prizes doled out, while hiders recall their vexes.

A lot harder than it used to be because you don't have as much inherent accuracy as pre-EoC, so the chance of hitting with bronze weapons is exceedingly low. A lot less feasible to do this now than before.

Mod Infinity will be in the wilderness in the area north of Edgeville at 14:00 UTC on the 17th of July. He will have access to a rotten potato, but it will probably still be possible to kill him if we can damage him faster than he can heal himself. I propose that we hold an event in which the goal is to kill Mod Infinity in the Wilderness. It should be a lot of fun. Temujin 11:07, July 16, 2014 (UTC)

Being in F2p for the majority of my time, it has come to my attention that the revenants in F2p have had it too easy. Let us rid them off this world. By attending in a large enough clan group we should be able to down them in little time. Also if this is a share world then we can all benefit.

A long deserved F2p event that can be challenging depending on numbers.

(Gamers Grotto, We can divide into two teams on two Fcs and enter the purple portal for a safe team PvP event.)

(Gamers Grotto), we will decide if players want to run the instance out of its resources or have people running about one-iteming others) Funds (talk) 00:18, June 22, 2014 (UTC)

We will be killing the Kalphite King in teams of 3-20. We will use shardshare, lootshare or free for all splits, depending on the majority vote. Free for all splits is automatic if three people are on a Kalphites slayer task. Funds (talk) 00:18, June 22, 2014 (UTC)

We will be killing Revenants. It does not matter if LootShare or shardshare is on, as revenant drops can't be split into shards. It is highly advised to bank the item if it is of high value (e.g Vesta's longsword) as the price will overlap other items you may be carrying. Highly advised to take 2hander weapons since we will be fighting PKers if they choose to fight us. Funds (talk) 16:59:12, July 15, 2014 (UTC)

Have a group skilling event. Perhaps we can all go fly fishing in Isafdar or pickpocketing dwarf traders. Have a good noncombat event for once, pleeeease? :)

Get ppl ready for the min/smth rework with a party at concentrated sandstone called: "Who's scarab mining?" I'd be happy to make some decorated mining urns for participants, say 100-200 or so? -Masolim

Barb Assault is dead regardless of the new update to it. We need some people there....

Everything must go! Both F2P and P2P

I would find it quite good and interesting if there was a week/weekend where absolutely anything could be sold on the grand exchange, it would give players (including me) an opportunity to collect items from previous events that they wanted to collect.

(A boxing event for the upcoming boxing fight between manny an floyd! Maybe the reward are like boxing gloves or something.)

Ok, the challenge gem allows XP competitions to have a monetary reward distributed: 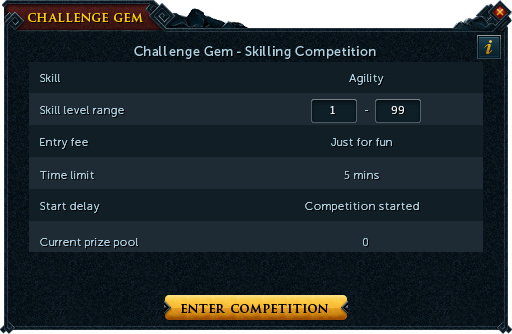 The prize pool likely being the sum of entry fees. So since it's buyable on GE and F2P as well, anyone can participate! Best of all even the losers benefit the first 100 times via titles.

Everybody in the group goes to popular locations like the GE and everyone plants flowers everywhere using mithril seeds. It would confuse everyone and I think it'd be a really fun and memorable event to have as people don't really flower bomb nowadays.

This would be a new Christmas event. The Saradomin churches of Geilinor have decided to help poor and orphaned children by gifting them Christmas cookies. With so many desperate children to help, they are asking the heroes of the realm to pitch in and bake for the cause. The event begins in Varrok with the task to bake ?? dozen butter cookies cut into different Christmas shapes. Heroes have to forge the cookie cutters and bake the cookies. Then, it goes to Lumbridge and the cookie request becomes slightly more complicated. On and on to x number of towns with each successive town having a slightly more challenging cookie to create. As the challenges escalate, cooking level requirements will increase and ingredients may also involve other skills, such as magic and herblore. Each cookie assignment rewards extra xp in the skills involved and holiday spirit. Holiday spirit can accumulate to purchase unique rewards. Low rewards could be christmas crackers that give a time-limited xp boost, or emotes. High rewards could be a unique pet that can bolster or replenish constitution, because that is the skill of heart. Or, cooking gear that benefits the skill somehow.Then, at the end of the event--SURPRISE!! Varrok hosts a Christmas cookie party where heroes can come and talk to some of the children they have helped as the children enjoy their sugary bounty. There will be clues in the conversations with certain children. At the end of these conversations, if the hero guesses the child's favorite cookie correctly, they are rewarded with extra holiday spirit to spend just before the event closes. (In the UK, these would be called Christmas biscuits.)

So basically, Deathmatch is a super fun PvP minigame that, aside from a couple people, has been dead since release. The rewards are really very good, and in fact, we're missing a lot of the pictures for them. Since they are hard to obtain, I feel like this event could not only be fun, but be extremely beneficial for the wiki.

Seconded. TzHaar Fight Pits might be fun, too! :) User_talk:Fswe1 Fswe1

This event is very similar to hide and seek except the clues given lead to a treasure chest (Treasure_chest_(Carnillean_Rising)) which is hidden in the ground by the host. There are two ways to proceed from here - have it hidden within an area with a code known to all (or no pin code) or have it on a certain square with a code which people are required to guess. Alternatively, you can make it into a hot/cold hunt where all participants have a key which will be hot or cold depending on their distance from the treasure chest.

SC has just received two new skilling outfits as rewards, totalling 800 points worth of items. Also, it's well suited to large groups and most people will probably like it as it features both combat and skill activities. Please mind the time though; many events start around 21/22h GMT which is stupidly late. -- User_talk:Fswe1 Fswe1

Climbing from the start at max complexity.