Note: Prepare your kill count before the event begins. At 19:00 UTC we will enter the boss chambers with or without you so leave yourself enough time to kill all 40 monsters. See down below for more details

A list of items that give protection can be found here. 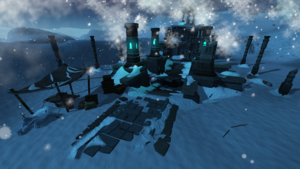 The entrance to the God Wars Dungeon.

Once at the eastern foot of Trollheim, go north past the Thrower trolls (Using the Protect from Ranged prayer to avoid constant ranged attacks is strongly recommended). Go up the north-east valley until you reach a large boulder. A player can simply use Surge to go pass the thrower trolls without getting damaged. This will require level 34 Magic.

The route to the God Wars Dungeon.

Please join friends chat "Megadog14" for the duration of the event.

Note: Changing worlds will not reset your killcount, leaving the dungeon however, will.

Make sure you listen very carefully at the start of the event to help make it run as smoothly as possible and begin killing as soon as possible.

Getting the kill count to enter the boss chamber is recommended to be done in Armadyl's Eyrie (see picture above). You should be killing the aviansie inside, which are weak to ranged. They drop a good amount of noted adamant bars, which can be sold for a decent profit. While getting your kill count, try to use as little prayer and food as possible, so that you can stay in the boss room for as long as possible. You can kill aviansies with either ranged or magic, but since they fly in the air, you cannot kill them with melee. This also counts for Kree'arra and her minions.

Prepare your kill count in advance, up to an hour before the event and once you have it log out and go do something else for a while until the event starts. Kill count can be as fast as 20 minutes or as long as 50 minutes depending on your ranged level and your ability to hit.

Always keep your RANGE PROTECTION prayers on or you will be dead with 2-3 hits.

Note: The mage and range attacks are single-hitting, however, Kree'arra's attacks are varied. When there is more then one person in the room, Kree'arra will launch multiple attacks at once, and the attack can be the same one several times or a combination of different attacks.

Kree'arra will use these attacks in no real order, therefore it is recommended that you are focused at all times. It is best to stay in the corner of the boss room, or at least against a wall, as Kree'arra is able to knock players back.

When the fight starts, run into a corner, or stand against a wall and attack Kree'arra. Keep Protect from Ranged or Deflect Ranged ON and eat when needed. ALWAYS kill Kree'arra first, and once he's dead kill the minions. Players with access to Soul Split can choose to use this instead of Protect ranged.

For familiars it's very wise to bring the best beast of burden you can. Make sure you bring a super restore flask and extra pouches for the familiar, to renew your familiar. Players with access to a unicorn stallion (88 summoning) may choose to use this familiar instead of a beast of burden - bringing a unicorn stallion pouch and scrolls along inside the beast of burden, to summon when the beast runs out of food, is a wise move. Both types of familiars play a great part in extending your trip. A bunyip on the other hand is not recommended, as it heals too little in comparison to the boss her hits.

As for auras, the penance and vampyrism auras are recommended, as they greatly improve the lengths of your trip. Other options would be sharpshooter and reverence, and their upgraded versions.

As for your inventory; take enough prayer pots/super restores and provide yourself with enough food. If you have a beast of burden, fill it with food. Extreme ranging potions or overloads are nice if you have access to them, but aren't required. The number of prayer pots taken depends on if you are using penance or not, and how much food your BoB can carry. At least 6 prayer flasks are suggested, even if you are using a penance aura. The rest should be food and a 1-click teleport and other items you like to take (boosting potions for example).

If you do not have Melee weapons of a greater tier, it is recommended to use Magic.

Death is usually fairly bothersome, but not on this trip. If you should die, your grave will be blessed immediately, giving you one hour to return and pick up your items. Obviously, any items you may be carrying that are not being protected by the gravestone will be lost, so plan what you will bring accordingly. Remember to bring everything you used to get to the GWD on the first trip as you will still need to make your way back to the GWD again. 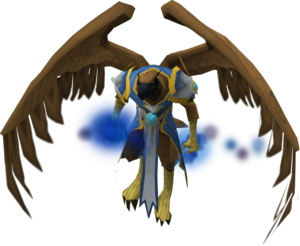 The unique drops that we will be hunting for include: