RunePass was a time-limited event for RuneScape that allowed players to earn items by playing the game, beginning on 2 July 2018 and lasting until the end of 15 July 2018. It has been noted as an experiment for future events.[1] RunePass was ultimately reworked into the Yak Track seasonal event, which was first released in November 2019.

It featured two prize tracks, a free path and a paid one, the latter of which gave more benefits and a larger number of prizes.[2] Players could unlock the paid track using 400 RuneCoins.

Players gained progress in the prize tracks by playing the game - including by simply obtaining experience - though progress could be made faster by completing set challenges.

Logging in during the event prompted a message in the chatbox:

The Ocean's Bounty is ready for plundering! Head to the Seasonal Event interface for more information about how to take part.

As a non-member, you can still take part!

As an ironman, you can still take part!

Although ironmen could progress through the track, only cosmetic overrides could be claimed. 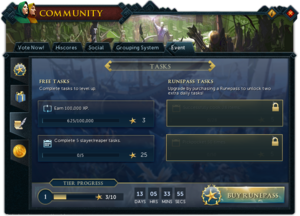 The interface for tasks

When the player finished a task, they would receive a message saying,

Congratulations! You have completed the '[task]' task for Ocean's Bounty.

Progressing through the tiers would give the message:

Congratulations! You have reached Tier [x] in - Ocean's Bounty.

For the free pass, there was one repeatable daily task that could be done for 3 starfish each along with a one-time weekly task for 25 starfish.

Only base experience counted for this task. Bonus experience or any form of lamps did not count.

The 5,000,000 experience challenge repeated endlessly after completion until the next day.

When a player completed this daily task, they would get the message:

Congratulations! You have completed the repeatable 'Gain XP' task for - Ocean's Bounty. You have gained 3 starfish and are currently X/X through Tier x.

For the paid pass, there were two extra one-time daily tasks that could be done for 5 starfish each. These could also be abandoned to advance to the next task in the queue, though the abandoned task could not be returned to. Players were not forced to complete a certain task every day; the tasks could be stacked and completed at a later date.

When a player completed a paid task, they would get the message:

You have gained 5 starfish and are currently X/X through Tier x. Congratulations! You have completed the 'Y' task for the Ocean's Bounty.

Players that unlocked the paid track for RunePass could also skip tiers by purchasing packs with RuneCoins using the store interface.

Purchasing a pack would give the message:

You have boosted yourself [x] levels in the Ocean's Bounty event. 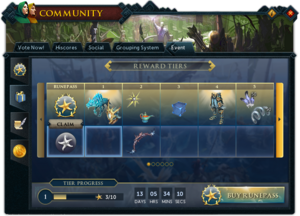 The interface for the prize tracks

RunePass was released as the main update for a week, raising concerns from players about the quality of updates. Jagex's response to this was that it was done because they would not be able to correctly trial the event if there were other factors that could distract players from it.[3]

The implementation of RunePass and the effect it has on the microtransaction aspect of RuneScape has caused controversy within the game's community. There has been criticism of the fact that the whole model of the pass is based on free-to-play games that are funded entirely through microtransactions rather than by a subscription, like RuneScape is. Mod Osborne explained that RunePass is a 'test to see if we can pull back from other things like Treasure Hunter',[4] and also noted that no Treasure Hunter promotions were taking place during the first week of RunePass.[1]

In addition to controversy around microtransactions, some players argued that the pass adds to 'dailyscape' - in which a player has to do a number of daily tasks which subtract from their overall playing time if they want rewards. Mod Cam responded to the claims by stating 'you aren’t forced to play a certain task on any given day'.[5]