From the RuneScape Wiki, the wiki for all things RuneScape
Jump to: navigation, search
The Old School RuneScape Wiki also has an article on: osrsw:Rune-Draw

Rune-Draw is a game of chance similar to blackjack. You must play Rune-Draw against Robin during the Ghosts Ahoy quest. Robin will give you a Signed oak shieldbow to pay off his debt when he owes you 100 coins.

The rules, according to Robin:

There are 10 different runes in total, nine of which will raise your score. The tenth is a death rune, which will end the game and make the player who draws it lose. The ten runes and their values are displayed below. 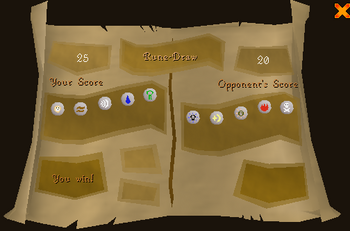 A player winning a game of Rune-Draw after the other player draws a death rune.