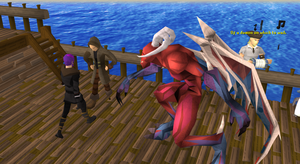 To the Braindeath Isle ye travelled. 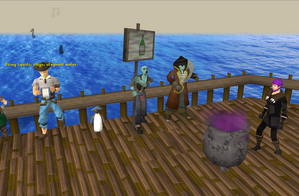 Rum Deal is one of Bard Roberts and the Stanky Penguins's songs, being named after the quest Rum Deal. As with all of Robert's songs, it is composed of 4 limericks (AABBA rhyme system) that provide a synopsis of the quest along with a cutscene involving:

The song also features a cauldron, row boat, 'rum', a squid, and a slugling.

Pirate Pete told ye a tall tale,
Of a demon on which to wail,
But 'twas all a test,
A made-up request,
Afore the truth he could unveil!

Braindeath revealed his conundrum,
As a task 'twas nothing humdrum,
Make a vile brew,
Use it to subdue,
Zombies picketing the 'rum'-run!

So, ye brewed it like ye oughta,
Using squids, slugs, stagnant water,
Got the zombies drunk,
Their blockade debunked,
Nay more brewers to the slaughter!