Rum Deal is the first quest in the pirate quest series, centring around the task of getting the production of 'rum' restarted as a band of angry, protesting undead pirates stake out Braindeath Island.

Zombie pirates have appeared on Braindeath Island, and they don't look friendly.

Production of 'rum' has stopped, and the pirate brewers are running scared.

Can you overcome the horde of drunken, undead pirates?

Can you even get to the island without getting a splitting headache?

The painful way you end up getting to Braindeath Island, courtesy of Pirate Pete's magical teleporting bottle.

You can do the entire quest without needing to leave Braindeath Island if you prepare properly. Before you leave for the island, make sure you have full prayer as you will not be able to get your wrench blessed if you don't have at least 470 points of prayer. Also bring slayer gloves, armour, weapons and food to kill the level 56 Evil Spirit.

Once prepared, talk to Pirate Pete on the dock north of Port Phasmatys. After listening to his lengthy "uncorroborated sob story," agree to help but tell him to keep the money he offers you. Pirate Pete clubs you over the head while you are distracted and then you will see a cutscene before waking up on Braindeath Island.

Upon waking, you find yourself in a small room. Talk to Captain Braindeath, and you see another cutscene. Continue talking to Captain Braindeath, and he tells you that he needs to make some 'rum' to get Captain Donnie—the leader of the zombie protesters—drunk. You have to gather the ingredients to make the 'rum'. The Captain gives you a blindweed seed to grow the first ingredient.

Follow the captain's instructions for gathering the ingredients to make the "finest, most potent, most flammable and most debilitatin' 'rum' in the whole of RuneScape". 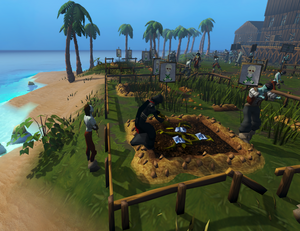 Harvesting grown blindweed in the patch.

The first ingredient is blindweed. Leave the building through the southernmost opening, and climb down the wooden stair. Head south through the fence to find a dozen weedy farming patches. The majority of them are trashed patches and are unusable. The south-eastern patch is still arable and is indicated on your minimap with the Farming icon. Rake away the weeds in the blindweed patch, and plant your blindweed seed.

"We interrupt this insult to bring you this soothing picture of a kitten. Normal service will be resumed shortly. Thank you for your patience."

Wait for the blindweed to grow (takes 1 minutes and 50 seconds). You get the message, "I wonder how my blindweed is coming along?" when it is fully grown. There is a chance of it growing quite quickly. Try intimidating the zombies while you wait. Pick the herb.

While around the farming patches, you may be attacked by Zombie swabs. Find a convenient safe spot, such as the other side of a broken fence, and choose the intimidate zombie swab option to stop them from attacking you. You have to scare each swab only once. The game censors your intimidating insult, and you see instead a short cutscene of a kitten playing with a ball of wool.

Return to Captain Braindeath, and speak with him. He tells you to put the blindweed in the intake hopper upstairs. Head to the south-east corner of the building and climb up the ladder. Head to the north-west corner of the floor, next to the pressure barrel and pressure lever. Use the blindweed on the hopper, then return to Captain Braindeath to find the next ingredient. 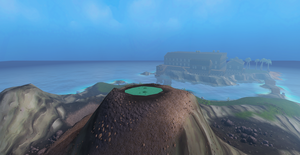 A pool of stagnant water.

) from a nearby volcano. If you don't have a bucket in your inventory, the captain gives you one. You can also pick up the bucket that spawns near him.

Leave the building via the south wooden stair again, pass through the fence, and travel north-west to find 50% Luke guarding a small gate. Open the gate and walk through: You automatically make a diversion for the guard. Head north, crossing the two bridges. When you reach the island, go north-east for a short bit, and then follow the path up the volcano. Use a bucket on the stagnant lake to collect a bucket of water. Head back down the mountain and to the gate.

Talk to the captain again. He says you need to catch five loads of sluglings and gives you a fishbowl and net, which is a fishbowl tangled in a big net (if you untangle the fishbowl and net, use one on the other to retangle them). Head south to the farming patch you used earlier: Several fishing spots are close by. Another spot is west of the farming patches and south of 50% Luke.

Fish the fishing spot with the fishbowl and net to catch five fish. You may catch fish other than the sluglings, but it doesn't matter which fish you get. After getting the fish, it is not necessary to talk to Braindeath since he has already told you to "pressurise them". Return to the attic, but instead of putting the sluglings in the hopper, you will have to "pressurise" them. Put them in the pressure barrel and pull the pressure Lever. You see the brewing control start to shake violently.

Head back down to Captain Braindeath.

Talk to the captain. He tells you a spirit has possessed the brewing controls and gives you a wrench. He says to get the wrench blessed and then give the controls a couple of belts with it.

Go to the pirate bunkhouse just west of the main room to find Davey. Talk with Davey, and ask him to bless your wrench. After an amusing discussion with him, he blesses your wrench, turning it into a holy wrench. He will only bless the wrench if you have at least 423 prayer points. The blessing may drain some of your points.

Now, get ready for a fight. If you forgot to bring your combat gear, you can return to Port Phasmatys and bank by speaking with Pirate Pete at the dock north-east of Captain Braindeath. Use the Holy wrench on the spinning, possessed Brewing control just south of the captain, and a level 56 Evil Spirit appears. Kill it, using your Protect from Melee prayer to reduce damage if you need to. The spirit has no weakness, so all styles are equally effective.

If ranging or maging, you can trap the Evil Spirit behind a support beam and the Brewing control and not take any damage, but this shouldn't be neccessary.

Return and speak again with the captain. He tells you to get the last ingredient: the body of a deceased fever spider. Climb down the ladder south-west of the Captain's room, equip your slayer gloves and kill a fever spider.

Fever spiders are level 70 and weak to crush attacks. They hit rather high, so make sure you have a good amount of food.

Collect its carcass, use it on the hopper upstairs, and return to Captain Braindeath.

Talk to the captain again. He tells you to "watch the glory of brewin' at its best!" You see a short cutscene, and ask "is that it?". He says yes and tells you to "feed the stuff to the pirates". He gives you another bucket to hold the rum.

Turn the output tap on the south side of the brewing vat to get a bucket of unsanitary swill. Head outside, down the wooden stair to the farming patches. Find Captain Donnie, talk to him, and give him the 'rum'. After some dialogue, Donnie tells you that Rabid Jack is the name of his boss. Return to Captain Braindeath, speak with him again for one last time, and claim your reward. 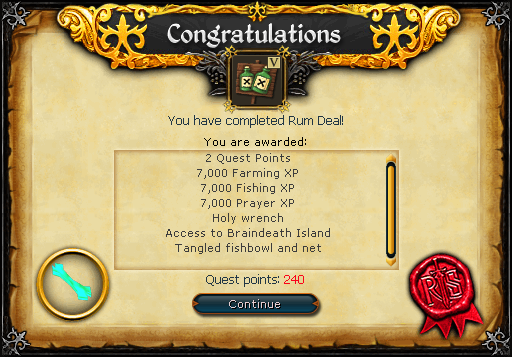 Rum Deal is directly required for the following quests/miniquests: 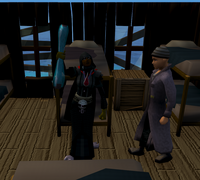