The ruby golem outfit is a Mining outfit that can be acquired via Treasure Hunter, or made via the Invention skill. The outfit pieces can each be made at level 80 Mining and level 20 Invention by combining 3,600 gemstone golem fragments at an Inventor's workbench, after discovering the Magic golem outfit blueprint at the workbench. 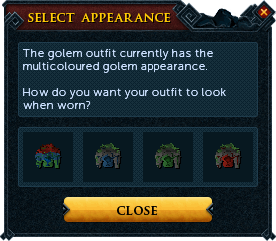