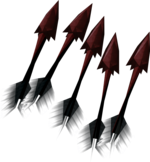 Enchanted ruby bakriminel bolts have a 5% chance of triggering the Blood Forfeit effect, which hits the target for up to 20% of their remaining life points, while dealing the player 10% of their own life points as recoil. In player killing situations, the damage is capped at 3,000; against monsters, it is capped at at 10,000 for regular hits. Critical hits are capped at 12,000 (15,000 with Erethdor's grimoire). For monsters with over 1,000,000 life points remaining, the chance of triggering is lowered by 1% for every 1,000,000.

Sacrifice can trigger the effect and will heal according to the damage dealt by the effect.

The actual effect of these bolts is somewhat complex. Because of its power level, blood forfeit has several restrictions placed on it:

The chance the effect occurs is at most:

When using a bleed ability like Fragmentation shot, the effect cannot occur. During combo abilities like Rapid fire the effect can occur on every hit.

When a monster is hit by the effect, they get a 6 seconds invisible cooldown during which the effect cannot occur on them again. However, if a player hits another target with an area of effect ability like Ricochet, additional targets do not share this cooldown and have their own chance to activate, unaffected by the primary target.

To calculate the damage, let

be the current life points of the target and let

be the maximum life points of the target.

The damage of blood forfeit starts at 20% of the enemy's health but the percentage goes down as their life points decrease (to a minimum of 1%). The percentage of current health the bolts will do is

Therefore, the damage done from this would be

The actual damage before boosts,

, will then be the minimum of these:

Any effect which modifies the damage blood forfeit replaces, such as Needle strike, Prayer, boosted levels or Scrimshaw of cruelty will modify the damage after the above has been calculated, although still subject to the regular damage caps. Non-critical hits have a damage cap of 10,000.[exception 1] The damage cap for critical hits vary depending on if the player is using an active Erethdor's grimoire and/or if their target is affected by Smoke Cloud.

For example, in the previous situation where Nex is at 80,000 health points and the effect triggers but the player is using the Desolation curse, boosted by 19 levels using a Supreme overload and under the effects of the remnants of the Stone of Jas from the Glacor Cave, blood forfeit would deal roughly 7,564-7,640 damage. The precise perk guarantees around 7,640 damage.

This formula is similar in PvP situations. The damage is always capped at 3,000 damage but scales down when the opponent's life points fall below half:

Damage done to the player[edit source]

The damage done to the player is not affected by any modifiers and will always deal 10% of their current health. Onslaught can trigger the effect (but damage bonuses that do not affect onslaught can also not affect blood forfeit during an onslaught). Onslaught's own self-damage would be taken as normal for that hit. Ruby bolts (e)'s self-damage appears to be 10% of the life points before the previous self-damage hit is taken into account, e.g. if the player had 6,000 life points, Onslaught deals 1,000 self-damage and then the next hit triggers ruby bolts (e), they would take 600 additional damage instead of 500.

This information has been compiled as part of the update history project. Some updates may not be included - see here for how to help out!
Retrieved from ‘https://runescape.wiki/w/Ruby_bakriminel_bolts_(e)?oldid=35633896’
Categories:
Hidden categories: