From the RuneScape Wiki, the wiki for all things RuneScape
Jump to navigation Jump to search
Item JSON: {"edible":"no","disassembly":"yes","stackable":"no","stacksinbank":"yes","death":"reclaimable","name":"Royale dwarf multicannon","bankable":"yes","gemw":false,"equipable":"no","members":"yes","id":"52172","release_date":"20 September 2021","restriction":"surface","release_update_post":"This Week In RuneScape: SteelSeries & Prime Gaming","lendable":"no","destroy":"Your item will be destroyed permanently and it may not be reclaimable.","highalch":false,"weight":20,"lowalch":false,"tradeable":"no","examine":"A powerful ranged device, mae out of pure gold and encrusted with gems.","noteable":"no"} 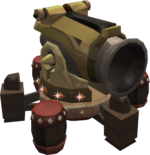 The royale cannon is an variant of the dwarf multicannon which adds gems and other cosmetic details to the cannon.

To unlock the ability to use the royale cannon, players must spend 100% respect from participating in the Artisans' Workshop. Purchasing this ability will also increase the maximum capacity of the cannon to 90 cannonballs. It is required to first purchase the gold dwarf multicannon for 50% respect - effectively making the true cost of the royale cannon 150% respect.

Once the ability is purchased, a regular or gold multicannon can be converted to the royale version at no cost by speaking to Egil while carrying the cannon in the inventory. (

The royale cannon is untradeable, but it is possible to convert it back to a normal cannon at any time.

After the royale cannon reward is purchased, the player can buy a reward called "Restocking cannon" for an additional 100% respect, which allows the cannon to auto-refill its ammunition as long as the player is within 15 spaces and has cannonballs in their inventory. 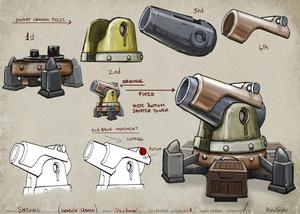 Artwork shown in the update.