Roving Elves is a sequel to the Waterfall Quest and Regicide. It revolves around consecrating the tomb of King Baxtorian on behalf of his and Glarial's grandson Islwyn. 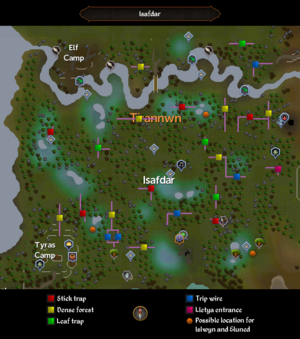 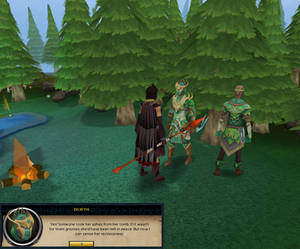 To start the quest, you must locate Islwyn, who can be found roaming Isafdar, the forest in Tirannwn. He and his companion Eluned can be found in one of two clearings at any one time, and he will switch between them every 5 minutes. The first clearing can be found east of Port Tyras, and the second south-west of Lletya (see the map to the right). The quickest way to find them is to go through the dense forest north of Port Tyras to reach the catapult, and then go south-east over a stick trap obstacle to reach a clearing with small pond. An alternative is to teleport to the Tirannwn lodestone and pass through the dense forest to the west of the Elf Tracker as you did in Regicide and proceed to the clearing with a small pond. If Eluned and Islwyn aren't there when you arrive, wait a few minutes or go to the clearing near the magic Trees also indicated on the map to the right. If the elves are not present, it is highly recommended to world hop as they are likely there on a different world.

Speak to Islwyn first. He will tell you to leave him alone because you are an easterner, claiming that all they do is take and destroy with no thought for others. He will explain that he dislikes humans and gnomes especially, because a gnome gave a human the key to his grandmother Glarial's tomb, and the human then disturbed it and took her ashes. Tell him that you are the human he is talking about, and that you put her remains in Baxtorian's home. While pleased that you were able to put her ashes in his grandfather's home, Islywn will explain that elven tombs have to be consecrated, and that you did not do so.

Offer to help him put his grandmother's soul to rest once more, and he will explain that while he does not know the consecration process, his companion Eluned does. Speak to Eluned, and she will explain that it is elven tradition to plant a specially enchanted crystal seed at elven graves, which will create guardians to protect the area. She will also explain that the seed has to be tuned to the individual that it's protecting, and that you can recover one from her old tomb by killing its guardian and bringing it back to her so she can re-enchant it. 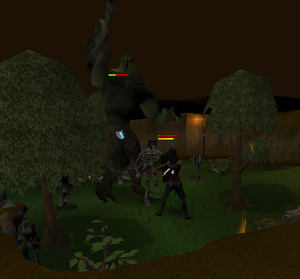 You must now go to Glarial's Tomb. As in the Waterfall Quest, you require Glarial's pebble to enter it, which you can get from Golrie in the Gnome Village Dungeon if you do not have it already. You also cannot bring any weapons, armour, runes, clue scrolls or summoning pouches, so visit a bank to deposit them all, although make sure not to deposit the pebble. Food and potions are also recommended as you have to fight a level 24 Moss giant without any armour, weapons, runes or prayer. Despite the restrictions imposed, the giant has only 1000 life points which most players should not have any trouble with even when fighting unarmed.

Once you are prepared, run north from Ardougne to Glarial's Tomb which is north-west of the Fishing Guild. You can teleport to the Fishing Guild if you have a skills necklace. Use Glarial's pebble with the tomb, and if you do not have any items in your inventory that are forbidden, the tomb will open. Once inside the tomb, you will need to find and defeat a level 24 Moss giant.

The Moss giant is fairly weak, although will take time to defeat if unarmed, but if using a weapon of any kind it should prove no challenge at all. If you do fight it unarmed, several abilities such as anticipation, provoke, sacrifice and debilitate can still be used. Using Legacy mode and attacking with auto attacks is also a good strategy, as is using dreadnips and/or rings of recoil. Once the moss giant is dead, take the Consecration seed it drops. Additionally, if you do not have one already, take Glarial's amulet from the chest in the western cavern of the dungeon, as you will need it later.

Items needed: Rope (unless you have built a rope rack), Glarial's amulet, consecration seed, "a key" (can be obtained inside the dungeon) 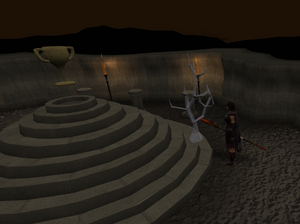 Return to Eluned in Tirannwn, and she will re-enchant the consecration seed and tell you to plant it inside Glarial's new resting place near her remains so she can rest in peace.

If you don't see Eluned or Islwyn, wait a few minutes and they should appear.

You must now head to the Waterfall Dungeon, which is where you had placed Glarial's ashes back during the Waterfall Quest. Head to the house atop Baxtorian Falls and board the raft in the backyard, which will then crash on a small island. Do not try to swim, but instead, use your rope on the nearby rock to reach the next island near the top of the waterfall. Do not climb down, and instead use your rope on the dead tree to reach the entrance to the dungeon. Make sure you are wearing Glarial's amulet, and then enter the dungeon.

If you do not have your key, search the crates in the north-east room to get another one. After you have the key, take the western path and run past the fire giants to reach a locked door. Use the key on the door and the door after that to reach the final room of the dungeon. You may now plant the seed; to do so, simply left click it, and it will grow into a small crystal tree, consecrating the tomb.

Once you've planted the seed, head back to Islywn, and he will thank you for what you've done, happy that both he and Glarial can rest in peace. Now that Glarial is no longer restless, he will offer you a reward: a choice between the crystal bow and the crystal shield. Choose either one, note that these are partially degraded and will only be charged to 20%, similar to when first purchasing a dungeoneering weapon. You can buy both later, regardless of which one you picked. 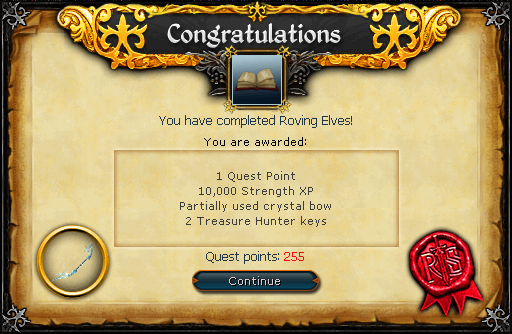 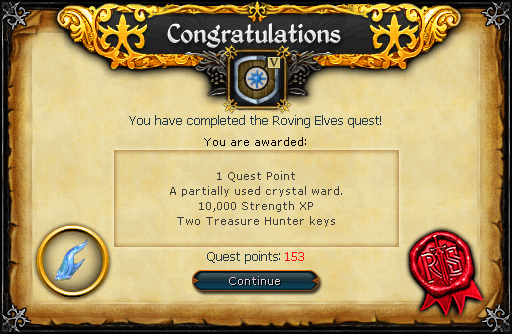 Roving Elves is directly required for the following quests/miniquests: