From the RuneScape Wiki, the wiki for all things RuneScape
Jump to: navigation, search
"Rp" redirects here. For the time-limited event, see RunePass. 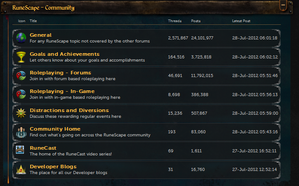 Role-playing on the official forums 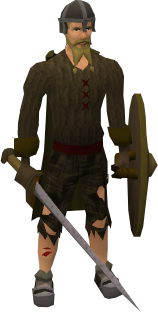 A player dressed up as a Fremennik market guard.

The notice received when logging into a Role-playing world

Role-playing, sometimes referred to as RP, is when players assume the identity of their RuneScape account as if it were real life. Rather than using the character as a tool, they become the character. Players who role-play often develop non-canonical back-stories and histories for their characters. Many times they assign their character a home town and even an actual home, such as a mostly empty building. They may also assign their character a job whilst in game, dressing and acting as one would act if they really had such a job, sometimes by running personal shops.

Another common staple of role-playing is outfitting. Players can make equipment, base clothing, and other cosmetic appearance changes to suit whatever role they are playing. Even many NPC appearances can be mimicked, such as Guards and Black Knights, although not so easily as certain armour updates have not been applied to the correct NPCs.

Players who role-play do not acknowledge that they are in a game and will speak as their role would. Some will also choose to adopt a medieval accent, since much of RuneScape draws from middle age culture, and because of this many role-players act as if they too are in the Middle Ages. When players need to break character, they often indicate this, such as by saying "ooc" (an initialism for "out of character") or by encasing the parts which break character in parentheses.

The current role-playing themed worlds on RuneScape are 41 (F2P) and 42 (P2P), however many players who log into those worlds have no interest in role-playing, and there are other reasons such as less lag or a friend who is on. However, in a patch note a notice was added telling people that they are on a role-play world. Role-players can ignore players who do not role-play, or take the more humorous route of refusing to break character and insisting that the non-role-players do not make sense. Players can limit the effect that non-role-players have on their gameplay by choosing a low-population area such as Gnome Stronghold, Tirannwn and Dragontooth island, and avoiding heavily populated areas such as Varrock or Falador though Falador is the most common place to find a freelancing role-player. Clan Chats are commonly used to gather role-players into a certain area and be able to keep in touch, both in role-play and ooc. One of the largest problems role-players face are trolls. If a non-role-playing player logs on, they will often troll a role-player by doing such things as putting down multi-cannons, performing emotes, or burning logs wherever the role-play is happening.

Currently, the most popular areas to role-play are in Falador (The Rising Sun Inn), Varrock (The Blue Moon Inn), and in the Hair of the Dog Inn located in Canifis, Morytania. Some towns and/or cities in the world 42 role-play "universe" even have self-proclaimed rulers, along with systems of government and laws for each town or "hold".

Players may often use their houses to make the game more interesting. Most of the houses that will be used, the users construction level may usually be above level 50 or more. It is another way to show off how high-class their house is. Most of the time the other playing users will leave during game because of lack of interest, they don't know what Role-Playing is and they leave when they learn or because when the host starts the game it is too late for the other users. (The users may be from another country or state which means that the time may be different)

RuneScape encourages users to use their creativity to have more fun and enjoy playing on RuneScape. RuneScape offers a quick guide in their forums. Occasionally while role-playing, the host will require the players to have a certain costume. This host may not give the costumes away for free, therefore the players will have to pay.

There are different ways to represent things the character does or things happening around you.

There is also a board for role-playing under "Community" section of the RuneScape Official Forums. There, players create role-playing threads. They are similar to role-playing in-game, except they use words to describe action and tell a story, like a text-based adventure game. Given that the only limitation is what players can write, forum-based role playing has more variety than in-game role playing, where players may find it slightly hard to convey any concepts not already found in the game. On the forums , Role-playing clans may oftentimes advertise their clan or their role-play idea.