The Rogues' Castle is a castle located in levels 50-54 Wilderness. It is occupied by several rogues, enforcers and captains. As the main door remains locked at all times, players must use a side entrance to get into the castle. The music track Regal is unlocked near the castle. The castle can be quickly reached by using the Wilderness obelisk which is located just southeast of the building. It is surrounded by an outer wall and several spiked barricades. This location almost has no use in free-to-play.

Players should be wary when approaching the castle as while the occupiers are non-hostile, the Chaos Elemental, a tough boss, patrols the area, and being in the Wilderness runs the risk of player killers attacking the player.

The castle has four floors, with the upper two floors being towers. On the ground floor[UK]1st floor[US], there is a range and three gold ore spawns. The 1st floor[UK]2nd floor[US] has another gold ore, as well a bronze square shield spawn. Additionally, three safecracking safes and three chests can be found on the 1st floor[UK]2nd floor[US], which can be stolen from using the Thieving skill. The 3rd floor[UK]4th floor[US] contains another gold ore spawn and an iron dagger spawn.

There is a weak portal to the Spirit Realm, which when activated grants 15,000 Thieving experience during the first visit. In the spirit version of the Rogues' Castle, players can lock the cell door, which unlocks it in the real version of the castle and allows players to talk to the trapped rogue inside. Doing so will allow him to escape to Varrock and is a requirement for the master quest cape.

The castle is one of the possible spawn points of Viggora during The Curse of Zaros. Additionally, the rogues can be pickpocketed for flame fragments during Lost Her Marbles. It is also the location of a Treasure Trails coordinate clue. 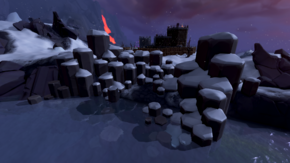 There is a deposit of columnar basalt along the shore to the north of the castle. The only other known deposit is near the Lighthouse. 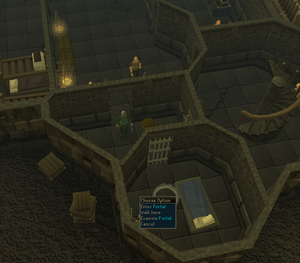 The portal for players stuck in jail to use to escape
Retrieved from ‘https://runescape.wiki/w/Rogues%27_Castle?oldid=35424281’
Categories:
Hidden categories: