From the RuneScape Wiki, the wiki for all things RuneScape
(Redirected from Rock Golem)
Jump to: navigation, search
The Old School RuneScape Wiki also has an article on: osrsw:Rock golem (monster) 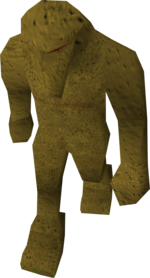 A rock golem can be found in the Enchanted Valley by mining the rocks in the south-western corner. The Enchanted Valley is the only place where you can still find the rock golem, alongside many other discontinued random event monsters. It no longer drops pickaxes or various ores upon death, instead dropping big bones along with the occasional long bone, and as such is generally killed for a novelty.

The rock golem was a Mining random event, but is now discontinued. Like the river troll and the tree spirit, the rock golem would randomly attack a player that gathers the resource that it guards; in this case, ores from rocks. The rock golem's level, like all other random guardians, was relative to the player. Their cry was: "Raarrrgghh! Flee human!"

The rock golem uses purely ranged attacks, which hit up to 40. However, if you use Protect from Ranged prayer, it will switch to a melee attack, and vice versa.

Before the update, the golem used to be purely melee combat. In an update, it gained a weaker but more accurate ranged ability, rock throwing, making it harder to avoid or escape from. If a player cannot fight and win, they need to run far enough away to avoid its ranged attack. Rock golems are vulnerable to crush attacks, characteristic of the pickaxes used to mine other forms of rock.