The Castle wars rock is used for catapults in Castle Wars. The player may obtain it on the ground floor storage room on a table in either castle. The table stocks unlimited ammo. The rocks are not tradeable and cannot be taken out of the arena as they will be lost when the game is over.

To use this rock, go to a functional catapult located on the corner of the castle wall, left-click on it then move the red x with the arrows to where you want the catapult to hit. The catapult system is criticized for many reasons, some being:

Due to these reasons, the catapult system is rarely used, except by players wishing to complete one of the Ardougne Tasks.

Players who have completed Catapult Construction do not get hit by friendly fire. 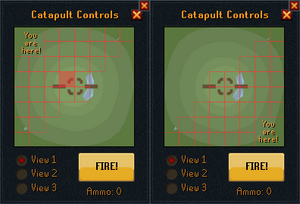 The controls for using the catapult for either teams

This information has been compiled as part of the update history project. Some updates may not be included - see here for how to help out!
Retrieved from ‘https://runescape.wiki/w/Rock_(Castle_Wars)?oldid=35274849’
Categories:
Hidden category: