From the RuneScape Wiki, the wiki for all things RuneScape
Jump to navigation Jump to search
The Old School RuneScape Wiki also has an article on: osrsw:Robin
This article is about the character involved in Ghosts Ahoy. For other uses, see Robin (disambiguation).

Robin Hood[1] is a supposedly famous master archer and one of the few humans in Port Phasmatys, where he can be found staying in The Green Ghost. Robin used to be the leader of a large gang, but they eventually left him under leadership of Dirk Turnip, since Robin forced them to live in the woods and wear ridiculous outfits.[2] The gang became a group of highwaymen, mugging people on the roads, and were dissatisfied with Dirk's callousness, but they decided to stick with him, everything being better than Robin.

During Ghosts Ahoy, players must get him to sign an oak shieldbow as a gift for Ak-Haranu. To obtain the bow players must gamble coins with Robin in games of Rune-Draw, until Robin owes more money than he can pay. He wears a Robin Hood hat and ranger boots, and wields a longbow.

If you speak to Robin before starting Ghosts Ahoy, he will brag about his fame, ask you if you have heard of him, and finally ask you to do him a favour: bring him a clean bedsheet from the innkeeper. The bedsheet the innkeeper gives you is wearable, making you look like a ghost in keeping with the Port Phasmatys theme. 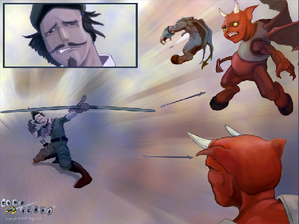