From the RuneScape Wiki, the wiki for all things RuneScape
Jump to navigation Jump to search
This article is about the ritual itself. For the quest, see Ritual of the Mahjarrat. 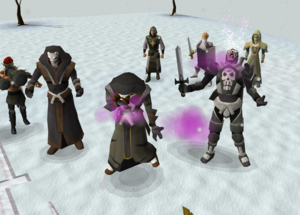 The Mahjarrat undergoing a rejuvenation.

The Ritual of Rejuvenation was an event which, prior to the death of Mah, occurred every five hundred years, where the remaining Mahjarrat on Gielinor gathered in The North to take part in a mysterious ceremony in which one of their number was sacrificed to give power to the rest. This ceremony and the events leading up to it were known collectively as the Ritual. 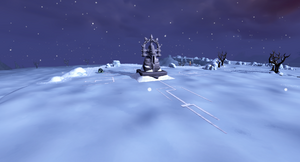 Very little is actually known about the Ritual. Prior to the Mahjarrat leaving their home world of Freneskae, Mother Mah (who was actually Seren), informed the various Dreams of Mah tribes that they had to sacrifice one of their own in the ritual to return anima to her. She hoped that by doing this, Mah could be kept content so that she would not destroy Freneskae in a rage due to her stunted growth. The Dreams of Mah accepted her proposal, with the exception of the Mahkorat who decided not to perform it.

When the Mahjarrat moved to Gielinor after being brought there by Icthlarin, they soon switched to Zaros's side after he had ticked off Sliske by releasing the wights he had claimed to serve as his army. The rituals were still performed as dictated by Mother Mah, but Zaros soon noted that this was inefficient and would most likely kill them off. He instead suggested that they perform the ritual every 500 years. The Mahjarrat Wahisietel soon learned from human astrologers of a syzygy, a planetary alignment that occurred every 500 years. Wahisietel suggested to the Mahjarrat that they use this as an indicator, which they accepted.

Before the Ritual[edit | edit source] 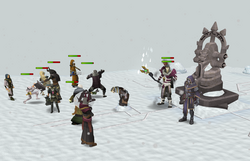 A fight occurring due to disagreement as to who the sacrifice shall be.

Before the Ritual itself begins, there is a series of secret alliances and clandestine deals made between various Mahjarrat in an effort to stack the odds unfairly in their favour. Following Zamorak's betrayal, both the Zarosian and Zamorakian Mahjarrat pitted themselves against each other, as the loss of a single Mahjarrat on their side could prove disastrous. However, some of the Mahjarrat have no qualms in sacrificing one that they feel lacks significant influence.

Those Mahjarrat who are unable to make an alliance or deal generally go along with the majority to remain in the more powerful Mahjarrats' good grace, although this has had mixed results. Some others have attempted neutral courses of action, which have also yielded mixed results.

When all the Mahjarrat have arrived, they soon get into a fight in which they declare who they feel should be sacrificed. However, if all of the Mahjarrat can agree on a single sacrifice, then they will do so, as shown with Lamistard in the 16th Ritual and nearly Lucien in the 18th. 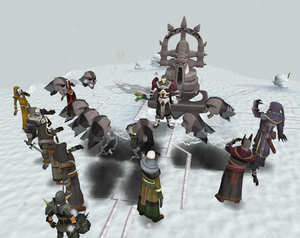 A Mahjarrat being sacrificed in the ritual.

As the syzygy approaches, the Mahjarrat fight to determine a loser. Azzanadra has indicated that a portion of this fighting may take place at the ruined Zarosian fortress known as Ghorrock, not far from the Ritual site. Only one witness account of this stage exists, made by an unwary Fremennik explorer who happened to stumble upon the Ritual site at the time of syzygy. With no idea of what it was he was observing, his description refers to the skies "dripping with venom and fire" and the earth "twisting into grotesque forms with mouths that chewed at the roots of trees that bled."

Once a loser is decided, they are taken to the centre of the Ritual site, the location of an allegedly powerful stone, and sacrificed. Though the exact details remain unspecified, it is understood that the victim of the sacrifice is killed, releasing a vast amount of power that all Mahjarrat nearby absorb, and other races will simply feel its effects. This is not unique to the Mahjarrat alone, as when Bilrach sacrificed the last Chelon-Mah, all life on Gielinor felt the strange power.

Consequently, some Mahjarrat have endeavoured to find a way around this unfair distribution of power. In the Tale of the Muspah quest, the player aids the Mahjarrat Jhallan in finding a resting place in the tunnels beneath the Ritual site in preparation for Gielinor's 18th Ritual. Expressing bitter sentiments towards the stronger, corrupt Mahjarrat such as Zemouregal who manipulate the results of the Ritual, he orders the adventurer to find him an ideal hiding spot after his original spot is compromised by them before freezing himself again in the hopes that he can avoid fighting in the next Ritual. Unfortunately for Jhallan, his plan did not work, as he gave away enough power that Lucien was able to sense him and proceeded to use him as the sacrifice.

A Mahjarrat known as Lamistard attempted something similar for the 16th Ritual, but instead dug his own series of tunnels below the Ritual site. Unfortunately, he accidentally tunneled into the basement of Zemouregal's nearby stronghold. When Zemouregal discovered this, he captured him and held him prisoner until the time of the Ritual, when the rest of the Mahjarrat agreed to use him as the sacrifice.

Following the Mahjarrat's ritual on Mah, they were given increased powers that surpassed that of the 18th Ritual, and the pull on their life force ceased. After Seren came down to confront Zaros and the Mahjarrat, Zamorak and the others realized that the Mah before them thousands of years ago was actually Seren and berated her for their greatest tradition being a facade and putting their race on the brink of extinction. The Mahjarrat quickly abandoned the rituals following this.

There have currently been 19 known Rituals.

The following is a list of known rituals, including when they took place and who was sacrificed, based on an estimated timeline of Gielinor's history. Mathematically, if the Ritual takes place every 500 years exactly, the first would have taken place in the First Age, despite the fact that the Mahjarrat arrived in Gielinor in the Second Age. There is however an indication that the rituals were more common in the earlier ages [1]

The Ritual Marker is the massive stone carving that marks the official location for where the Ritual will take place. It is here that the loser is sacrificed. According to Lucien in the Fremennik Saga Nadir, the stone is bound to the ritual site. This was later confirmed by Mod Osborne, who also hinted that the Daemonheim Ritual Marker might have come from Freneskae.[2]

Later, however, remnants of Wahisietel's memories confirmed that it was Zaros who provided the Mahjarrat with a replacement Marker Stone.