From the RuneScape Wiki, the wiki for all things RuneScape
Jump to: navigation, search
Ritual markerRitual stone 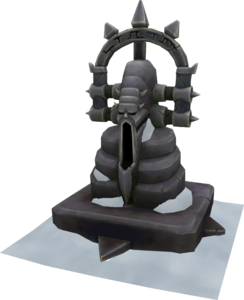 The original marker was created by the goddess Seren on Freneskae while under the guise of Mah, the Elder God that created the Mahjarrat and the other tribes of the Dreams of Mah. Seren instructed all of the tribes to periodically sacrifice one of their kind to pay tribute to Mah, with the intent that their energy would then be channelled through the marker into Mah in order to rejuvenate her. This marker was left in Freneskae after the Mahjarrat left with Icthlarin, presumably because it was bound to the area like the current one is.

The current version of the marker was created by another of Mah's creations and Seren's "companion" - Zaros - in the Second Age, after he learnt of the Ritual of Rejuvenation while meeting with the Mahjarrat at the fortress of Kharid-et.[1] Zaros was the one that told the Mahjarrat that without Mah, they could use the ritual to rejuvenate themselves, and told them to do it every 500 years. The marker was eventually relocated from Kharid-et to its current location at Ghorrock.[2]

Shortly after the 17th Gielinor ritual in the Fourth Age, Moia, the daughter of Lucien, discovered that someone had tried to move the Ghorrock marker, and embarked on a mission to find the Mahjarrat Bilrach, who was not present at the ritual and whom Lucien believed may be responsible. Upon reaching the bottom of Daemonheim, Moia discovered Bilrach in a room with a broken version of the Ritual Marker, which he claimed to be the original from Freneskae, brought to him in pieces by Hearthen.