Rite of Passage is a potential upcoming quest about the aviansie. The quest has previously been worked on by Mod Raven, but is not currently in development.[1] It was polled against other Sixth Age quests in the Power to the Players Quest Poll in March 2014, but lost to an elder god quest. It was later voted as one of the top choices in the March 2015 suggestions on RuneLabs but came last in the following Player Power poll, which was won by The Light Within quest.

Rite of Passage would dramatically increase the lore on the aviansie and Armadyl. Things such as Armadyl's ascension and the artefact he used to ascend, how Armadyl originally found the Staff of Armadyl, why the aviansie aren't returning to Gielinor yet, the "new Guardians of Armadyl", and Armadyl's motives in the Sixth Age may be explored in this quest.[5][6] The signature hero Linza was originally mentioned as a character for the quest, though this is likely to have changed, as Linza was turned into a Wight following the events of Kindred Spirits.[7] Completion of Missing, Presumed Death would be a requirement for Rite of Passage.[8] The quest is currently undergoing a redesign due to an expansion in lore.[9] 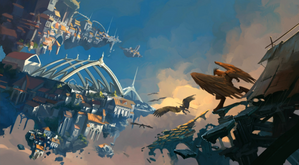 Concept art showing a village in Abbinah, the world Rite of Passage would take place on.