Rise of the Zombie Monkeys! 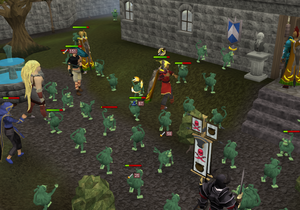 Rise of the Zombie Monkeys! was an activity during the last of the Wild Weekends, which was part of the Mad May month-long event. The Community Team spawned invasions of level 65 zombie monkeys throughout the weekend.[1] If five monkeys were killed on a given day, a medium XP lamp would be rewarded. The event was held on a three day period (26 May 2012, Saturday to 28 May 2012, Monday), thus allowing a total of three experience lamps to be earned.[1]

The community was updated concerning the whereabouts of the monkeys by the Jagex Community Team, who stated which worlds the zombie monkeys would be spawning on using the Forums, as well as the official Runescape Twitter. The zombie monkeys at Ape Atoll Dungeon did not count towards the five kills for an experience lamp.

Among the locations they appeared, six were consistent throughout sessions:

The zombie monkeys were level 65 and attacked using melee. Lower-levelled players were strongly advised to bring food as the attacks were damaging. Since these areas were usually crowded, it was also advised to use long range fighting styles (i.e. Magic and Range). Upon death, the zombie monkeys dropped bones and a banana.

After killing five monkeys in one day players were rewarded with a medium XP lamp. The lamp could be used on any skill. Each player could only earn one lamp per day, so after killing five zombie monkeys, it was advised to leave the area out of courtesy towards the players who had yet to achieve this.

Due to the extremely high amount of players and NPCs assembling in a small area, it was advised to lower graphics setting to the lowest possible option in order to reduce the inevitable lag.

After the first day, zombie monkeys would only spawn on free-to-play worlds, to prevent players from using cannons to inconvenience others. This also meant that any player wishing to use their lamp on a members' skill had to hop back to a members' server.