From the RuneScape Wiki, the wiki for all things RuneScape
Jump to navigation Jump to search
Reyna? (edit) 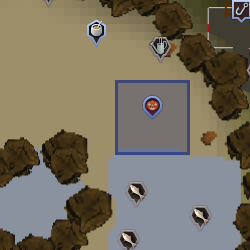 Up to 20 buckets of sand could be handed in to her daily until the release of the beach party on 15 August. The buckets couldn't be in noted form. For every 20 buckets players were rewarded with a mystery box, and if players did this on each of the five days, they were rewarded a big mystery box.

Reyna could be right-clicked to be talked to, to hand in the sand, to check the amount of the daily sand handed in and to get the big mystery box.

Reyna is also found in the north-east corner of Lumbridge Crater during the Celebration of Fire 2016. She is lamenting the loss of her beach next to the only patch of sand left on the ground.

On 17 July 2017 she reappeared at the north-east corner of Lumbridge Crater for the Build A Beach event. Players could hand in Beach sand to her to unlock cosmetic rewards, the Beach Sand Outfit and the ring of sand.

On 30 July 2018, she reappeared at the Lumbridge Crater as the host of the Summer Beach Party. She allows players to check their title progressions from previous years, hands out a daily Sandy Clue Scroll and also hands out a treasure map.

This information has been compiled as part of the update history project. Some updates may not be included - see here for how to help out!
Retrieved from ‘https://runescape.wiki/w/Reyna?oldid=35689461’
Categories:
Hidden categories: