From the RuneScape Wiki, the wiki for all things RuneScape
(Redirected from Revenant)
Jump to navigation Jump to search
The Old School RuneScape Wiki also has an article on: osrsw:RevenantsWikipedia also has an article on: wikipedia:Revenant (folklore)
This article is about the monsters. For information on fighting revenants, see Revenant hunting guide (F2P) (P2P).
For the cosmetic override set, see Revenant (override).

Revenants, also called the Holy Ones,[1] are the ghostly versions of creatures slain in the God Wars, and used to be amongst the most dangerous type of monsters in RuneScape. The word revenant comes from a French word meaning "returned". Before 1 February 2011, Revenants could be found patrolling freely around various parts of the Wilderness, but are now found only in the north-east chamber of the Forinthry Dungeon (level 28-31 Wilderness). Slaying at least one of every type of revenant is a requirement for one of the elite Wilderness achievements.

Revenants can also drop their spirit - a pet drop which unlocks the lowest level revenant and each successive drop allows for the next strongest revenant to be unlocked. The drop rate of this item continues to decrease as the player unlocks more reskins.

Revenants may be assigned as a slayer task from Mandrith. They cannot be placed in the Sunken Pyramid - attempting to do so will state that they need to be within the Wilderness to survive. As revenants are classified as ghosts, they also count towards ghost Slayer assignments. Some may also double for other tasks, depending on the revenant in question.

Since revenants are classified as undead creatures, they are affected by both salve amulet and its enchanted version, the Undead Slayer perk, and the Undead Slayer ability. As they are specifically classified as ghosts, players can wear Ghost hunter equipment to deal up to 10% additional damage to revenants. Revenants take 25% extra damage from Revenant bane equipment. All types of revenants are also susceptible to the Inquisitor staff.

Revenants use all three types of the combat triangle.

They are always aggressive towards anyone within their attack range. Their wander range is six game squares from spawn. When they are chasing after a target, they will persist until their target is over eight game squares from their maximum wander range (14 game squares) and lose interest. Revenants are also capable of short teleportation around obstacles (e.g. walls) provided that they managed to attack their target once before doing so. Teleporting this way ignores the revenants maximum wander range. Revenants can be made tolerant via natural timer, but this limits the player to a small area. Instead, a Forinthry bracelet can be used, with each activation protecting the player from revenant damage for a minute, and makes them tolerant for an hour.

Revenants will "eat" from their limited food supply to restore 1/6th of their maximum health after an initial delay of 2.4 seconds for each hitsplat they received that has them below 50% health. This will not occur if the revenants run out of food. Revenant's healing mechanic does not trigger under 50% health unless they specifically take damage from a player or their familiar. Multiple hits that occur sooner than 2.4 seconds count as multiple heals; the first heal happens after the initial delay of 2.4 seconds with the following hitsplat(s) that occured healing at an interval of 0-1.8 seconds depending on how close it was to the initial hitsplat(s) that triggered the revenants to heal; if the revenants heal over 50% health, this chain will end. Revenants can "eat" to heal a maximum of three times in the same tick. During the time that revenants are queued to heal from a hit, they do not attack any players. Low damaging abilities or bleeds are inefficient as they deal too little damage allowing the revenants to outheal them. Players can delay an ability from hitting to fire off two abilities simultaneously or right after an auto-attack to deal more upfront damage and killing the revenants before they heal.

Hitsplats that do not trigger the revenant's healing mechanic: 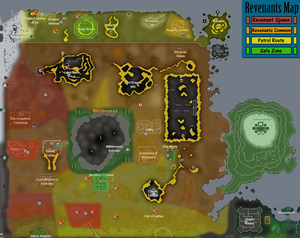 Many aspects of revenants were introduced to mimic player killers, such as roaming around the Wilderness to search for unfortunate targets, being able to heal themselves, cure themselves of poison, use multiple combat styles, freeze and teleblock players, and often travelled in packs when wandering multi-combat areas to mimic small parties. Revenants could only attack targets that were in the appropriate combat range; for example, a revenant ork, who had a combat level of 105, could not attack a level 89 or lower player if it encountered one in level 15 Wilderness, and vice versa.

However, the revenants were arguably weaker than the player killers themselves. Players could attack revenants without being skulled (though it was unlikely the revenant would not discover the player), and revenants fell short of actual tactics. Whereas a player killer would time when to eat and land killing blows, a revenant could only use normal attacks and could not combo out players alone. Player killers could also be placated with reasoning, whereas a revenant would relentlessly pursue their target until either one died or it could not find them anymore. Revenants also had inconsistent drop tables, as despite their immense strength they lacked a rewarding drop table to compensate for such difficulty, often dropping small amounts of coins or even nothing at all. Revenants were also incapable of running, making them easier to avoid despite their long attack range.

There were a number of mechanics regarding their movement:

The drop rate of revenant items is calculated as follows:[2]

Mod Ash confirming the effects of Jennica's ring on revenants

Additionally, all revenants except revenant imps and goblins have a special tertiary drop unique to that type of revenant. The chance of receiving one of these drops is roughly doubled by wearing Jennica's ring. Jennica's ring does not affect any of revenants' other drops. 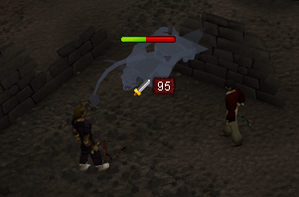 During the Second Age, the Wilderness was the heart of the kingdom of the Empty Lord, Zaros. At the time, the land was prosperous and wooded, protected from his enemies by enormous military strength. However, when he was overthrown by Zamorak, the God Wars began.

The God Wars that raged across Gielinor for 4,000 years were the world's darkest hours. The races of countless civilisations were forced into extinction, and entire regions were left uninhabitable by battle.

At one point during the war, Saradomin made an uneasy alliance with Bandos and Armadyl to stop Zamorak for good. Cornered and weakened by the three gods, Zamorak used the Stone of Jas in a last-ditch attempt to annihilate his enemies. The tactic failed, but the surge of power annihilated Forinthry, turning in into a barren and desolate wasteland. 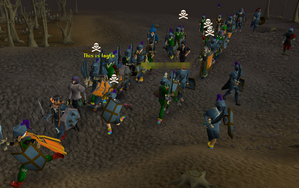 Banishment of the revenants from the wilderness, led by player moderators.[5]

Many of those that died in the Wars are trapped eternally in the Wilderness, due to their souls being twisted by the evil magic and corruption that surrounds it. For a very long time, over 2,000 years later, these creatures, known now as the revenants, began patrolling the Wilderness and attacking all who they encountered, using everything in their power to stop them.

They were said to have guided the head mystic to a portal leading to the Primordial realm, where he and a few others set up camp around the portal to construct new bodies for them. In recent days, the portal relocated to the Gamers' Grotto, so the mystics relocated there to continue their duties.

As of the late Fifth Age, the Wilderness was "reclaimed" by humans, who had been tired of the revenants' terror. Many revenants were slain, and the few that survived were driven into an underground complex, severely weakened from the conflict. However, they are still dangerous and not to be underestimated, and will attack any who challenge them or wander into their chamber.

The different types of revenants are listed below: