From the RuneScape Wiki, the wiki for all things RuneScape
(Redirected from Repair NPC)
Jump to navigation Jump to search
This article is about the degradation mechanics of combat equipment. For degradation in general, see Degradation.
For a list of degradable items with the number of charges, see Equipment degradation/List.

Equipment degradation is the process by which some armour and weapons wear down with use until they break completely. Some items are repairable, while others are not and degrade 'to dust'.

The amount an item has degraded can usually be checked by using the Check-charges right-click option for the item.

Items that degrade have a specific number of charges which varies by the type of item. When equipped, they lose one charge for every hitsplat done by the user or to the user - that is, one charge for:

These three methods are collectively referred to as per hit.

When an item fully degrades (reaches 0 charges), one of three things will happen to it:

Completely degraded weapons all have an accuracy rating of 110, equivalent to a tier 1 weapon, and an attack range of 1, forcing players adjacent to their target regardless of combat style. Completely degraded armours have no bonuses of any kind.

For a table of items with their charges, see Equipment degradation/List.
For a complete index of degradable equipment, see Category:Degrading equipment.

Repairable items, as their name suggests, can be repaired when degraded or broken. There is one common shared method to repair items - the armour stand - and many unique methods for those that do not use the armour stand. 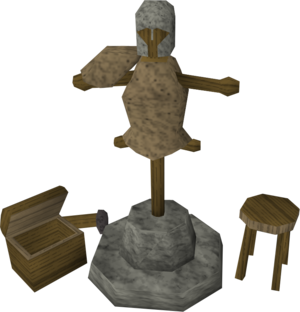 An armour stand, where many items can be repaired

Many items are all repairable using coins on an armour stand in a player-owned house (or a whetstone device anywhere), where the base cost is reduced by your Smithing level with 0.5% discount per level, including boosts. Assists do not work.

Alternatively, one can repair them for the base cost by taking them to any of:

All items of this repair type degrade to a broken or drained version.

Examples of this include:

There are many items that are repairable in a specific way. Some items of this type degrade to a broken or drained version, while others revert to a component. Some examples of this:

Malevolent armour, a set which degrades to dust

Some examples of degrade to dust equipment include:

The amount of usage an item gets before it degrades is often quoted as a time. This is often misleading or sometimes incorrect - the time that news posts give are usually the minimum combat time, using the maximum degradation rate of 1 charge per tick (and may ignore the double charges lost by some items). In real combat, charges are lost much less frequently: solid revolution uses 33 abilities per minute (with no combo attacks, like Fury), and most monsters cannot attack as fast as that - and they will often hit as you use an ability, which will negate the degradation that hit causes (as only 1 charge can be lost per tick). In addition, in a lot of combat there are often breaks between monsters, where of course no degradation occurs.

Thus, you can generally expect around 30–60 charges drained in an average minute of combat. Common charge amounts are given here with three time values for how long it will last before degrading fully.

Other types of degradation[edit | edit source]

Equipment degradation is not the only type of degradation. Many items, both combat related or otherwise, have limited usage until they break or fall apart. Items that do not degrade according to the above system are not defined as degrading equipment (although the term 'degradation' is often used in relation to them).

Some examples of limited use items which do not fall under the equipment degradation system: