From the RuneScape Wiki, the wiki for all things RuneScape
Jump to: navigation, search
Remototem? (edit) 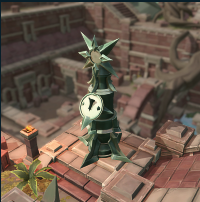 Remototem is located north-east of lodestone.

The Remototem is a totem that allows the player to activate all 3 of their currently placed totems from the Anachronia base camp. The remototem can only be placed in the base camp. It is created by combining the remototem top, middle, and base pieces. It will be consumed when purchasing the building in the manage base camp interface combined with 150,000 each of stone, wood and vine.