From the RuneScape Wiki, the wiki for all things RuneScape
(Redirected from Remote farm)
Jump to: navigation, search
The Old School RuneScape Wiki also has an article on: osrsw:Geomancy
This article is about the Lunar spell. For the Invention machine, see remote farm device. 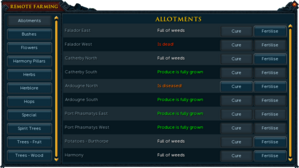 Remote Farm is a Lunar spell released with Livid Farm on the 4 April 2011. The spell must first be unlocked while training at the Livid Farm by accumulating 150,000 produce points. It allows the status of every single farm patch in RuneScape to be viewed and, if a patch is diseased, grants the option to cure all patches in one cast. Remote Farm can be cast within some minigames or Distractions and Diversions, such as Stealing Creation or Fish Flingers. Curing a patch will generate a stack of Leaves.

A farming cycle tick happens every 500 game ticks (approximately 5 minutes), which is when crops are updated with their new stats. However, these ticks don't occur if you have an interface open (for example, the Remote Farming window or a bank window) and are delayed until the interface is closed. Thus, Remote Farm won't give live information even if crops update, so there is no point in leaving the window open to watch your crops. However, you can update the information if a farming tick occurs by closing the interface and casting the spell again.

Remote farm device - a machine that does the same thing as the spell.