From the RuneScape Wiki, the wiki for all things RuneScape
(Redirected from Relomia)
Jump to navigation Jump to search
Loading...
NPCCombat
RelomiaRelomia, Emissary of Sliske? (edit) 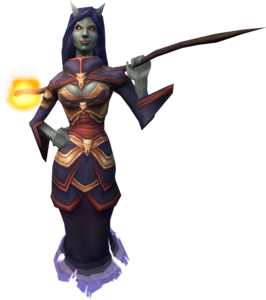 Relomia is the emissary of Sliske. She can be found in Draynor Village.

According to Relomia, those who choose to follow Sliske will be helped through the dark times. If one opts to pledge allegiance to Sliske by talking to Relomia, she will give various tasks to complete. Relomia will also hand them a banner of Sliske and a Book of the Gods. The title "[Name] of Sliske" may be activated through this emissary. The banner may be used to contact Relomia any time, and receive new tasks.

Originally from Ardougne, Relomia used to be a simple housemaid. One day she miraculously stumbled into the Shadow Realm and somehow got stuck there. After many years, during which her appearance was significantly altered, she encountered Sliske, who rescued her, likely with ulterior motives. Upon hearing of Sliske's slaying of Guthix, Relomia began to proclaim him to be a deity. Sliske himself, however, did not seem to care much for Relomia's actions (even referring to her as needy[1]), and neither was he a god or sought godhood.[2][3]

Relomia was present during Sliske's Grand Ascendancy at the Empyrean Citadel, though somehow she got herself stuck on top of a rock. Insisting that she was invited, she looked for Sliske and asked the World Guardian if he had mentioned her as they passed by. She was not seen in the Citadel following Strisath's rampage, implying she was able to leave safely.

After several people went missing from Taverley and Burthorpe, Linza directed the World Guardian to speak with Relomia, who was seen just before the last person had disappeared. Upon being questioned, Relomia informed them that Sliske had been stripped of his power and captured by the Dragonkin, who had also kidnapped the rest of the missing people. She then sent the duo to Daemonheim, where Sliske was allegedly being held prisoner.

In the end, however, this turned out to be a ruse: not only were the Dragonkin not involved with the disappearances, it was Sliske himself who kidnapped the missing people and had Relomia send the World Guardian to him.

When the solar eclipse approached and Sliske's game neared its end, Relomia contacted the World Guardian and directed them to meet with the gods and hand them their invitations to the final event, warning them that they would have to pick a side when they were finished.[4] Once all the invitations had been delivered, Relomia revealed that the final event would take place in the Heart of Gielinor and that Sliske would meet the gods and other contestants at the camp near the entrance.

After the end of the contest and Sliske's defeat, Icthlarin tasked the World Guardian with telling Relomia of her master's demise. Though she took the news poorly, she was somehow able to calm down and cheer up, much to the World Guardian's confusion.

The following takes place during Once Upon a Time in Gielinor: Foreshadowing.

Waking up in Death's office, the World Guardian attempted to explain the situation to Death, who was also convinced that they were Relomia. Though Death was initially skeptical, upon closer examination, he was able to see through the identity switch and realised that Relomia had cast a spell on the party hat to facilitate it.[7] Waiving the World Guardian's death, he advised them to go to Closure's study in order to resolve the necessary paperwork and prevent such errors from happening in the future.[8] The World Guardian did as instructed, but found that Delrith, Count Draynor and Elvarg were first in line, so they performed a few favours for them in exchange for being allowed to take their spot in the queue. When Closure finally allowed the World Guardian to enter his office, he was able to quickly fix the identity switch, but could not force Relomia to relinquish it completely. He then instructed the World Guardian to have her willingly sign a contract Death had given him in order to have her give up the stolen identity, explaining that there could be grave consequences if the matter was not solved.[9] In order to make sure Relomia would not recognise the World Guardian, Closure tweaked the spell she cast on the party hat.

The World Guardian then returned to the party, where they tricked Relomia into signing the contract by convincing her it was an autograph. Once she signed it, the World Guardian revealed her mistake, upon which she blamed them for her feeling lost without Sliske.[10] She then fled the scene, but not before swearing she would be back for revenge.[11]

The following takes place during Once Upon a Time in Gielinor: Flashback.

Relomia stole and altered a a stack of biographies that belong to Closure and made changes to several biographies, resulting in Merlin, Ava, and Ozan being sent to Closure's office as dead, until their histories (during Merlin's Crystal, Animal Magnetism, and Stolen Hearts, respectively) were restored.

The following takes place during Once Upon a Time in Gielinor: Fortunes.

The World Guardian worked with Closure and Death to prepare a quest for Relomia to help her feel like a hero and rethink her ways. At the end, she was given a chance to look at her own biography.

The following takes place during Once Upon a Time in Gielinor: Finale.

It is revealed that in the future, as a result of her encouragement from the player thinking of her (despite knowing the quest was false) and seeing what she'd be like in the future, Relomia will indeed become a hero in her own right--specifically, working for Closure as the Time Guardian.

During the quest, this future version of Relomia (now dead) requests help from the present-day World Guardian to resolve three future situations she bungled (each somehow leading to her death)--an infiltration of the Black Knights' Fortress by future versions of Meg, Bosun Higgs, Eva Cashien, and the Raptor, a defense of Kami-Shima's foo lions by future versions of Kami, Sojobo, Honovi, and Kami's pet Shi guardian Fraji, and forcing a Teragardian Bright Inquisitor back through the World Gate with the help of future versions of Philipe Carnillean, Commander Zilyana, Nymora, and the Magister.

Once all three situations resolve, she thanks the player before returning to her role as the Time Guardian, reminding the player that her present self is still learning. She briefly makes a "Do you really think you can save them" joke, then leaves.

At the end, Closure explicitly compares Relomia's path to the player's: duped by Mahjarrat, helping heroes who weren't really heroes, hurting villains that weren't really villains, becoming a hero of renown, and eventually a guardian protecting all.

It is also revealed during the epilogue through optional dialogue that present-day Relomia has voices akin to the Light Voice and Shadow Voice. It's unknown whether these have a connection to Sliske.

Relomia was graphically updated as a hidden update a week before the release of Sliske's Endgame.

Transcripts Relomia, Emissary of Sliske is the author or co-author of: