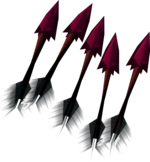 Enchanted red topaz bakriminel bolts have a 5% chance of triggering the Down to Earth effect, which reduces the targets magic level by 2 and damage by 1%. This effect caps at 10 levels and 5% damage. The magic damage debuff lasts for 2 minutes, subsequent activations will add new stacks but not refresh existing ones.

This effect can be triggered with auto attacks and abilities. Abilities will only consume bolts in PvP. Multi-target abilities such as ricochet can trigger the effect separately on secondary targets. Abilities that hit multiple times such as rapid fire have a chance to trigger it on each hit separately.

This information has been compiled as part of the update history project. Some updates may not be included - see here for how to help out!
Retrieved from ‘https://runescape.wiki/w/Red_topaz_bakriminel_bolts_(e)?oldid=35537676’
Categories:
Hidden categories: