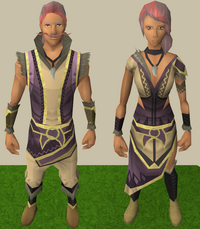 A player before and after a gender change from the Makeover Mage.

Talk to Sir Amik Varze to start the quest. Find him in Falador White Knights' Castle in the western tower on the 2nd floor[UK]3rd floor[US]. He asks you to join their secret organisation, the Temple Knights. If you accept, he directs you to a certain Sir Tiffy Cashien to begin your training immediately.

Bank all of your items and equipment and talk to Sir Tiffy Cashien in Falador Park to take the mental test. Sir Tiffy won't let you start the test if you have anything in your inventory or equipped.

Sir Cashien will take you to the testing grounds. There are seven different testing rooms. In each room, there is a yellow portal at the beginning of the room which returns you to Falador, and a yellow portal at the end of the room which you may use to travel to the next room after you pass the test. You need to complete five in a row. The first test is always either Sir Ren Itchwood, Ms. Hynn Terprett, or Sir Tinley. Certain other tests, such as Sir Kuam Ferentse are always included in the rotation. The remaining tests will be a random selection. If you fail a test, you will be returned to Falador and will have to speak with Sir Cashien again to start over from the beginning. 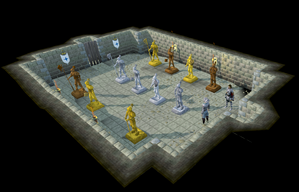 A room with statues of knights

Lady Table will test your memory. She will have 11 statues of a knight in front of her. There are supposed to be 12, but one has been taken away. You will have a few seconds to look at the statues, then the missing one will be returned. You must then touch the one that was missing.

The trick to passing this one is to analyse the types of statues. There are 4 statues for each of the 3 metal types: bronze, silver, and gold. First see which type has only 3 statues shown. After you figure out the type, figure out the weapon. There are 4 weapons: sword, halberd, greataxe, and mace. Figure out which weapon is missing. After you have figured it out, touch the statue.

A good strategy is to take a screenshot of the statues, and use it to find the missing statue.

Do not talk to her during the ten seconds you have to locate the missing statue, as the order will be reset; however, your ten seconds will not, thus giving you less time to find it again. 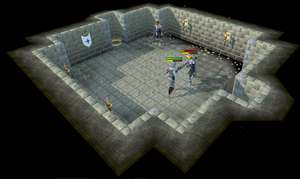 Sir Kuam Ferentse tells you that you must defeat Sir Leye, who is level 7. Sir Leye has been blessed by Saradomin so that no man may defeat him. So unless you have a female character, you will not be able to hit the final blow on him. Defeat him to pass the test. With low combat abilities it may be hard to hit Sir Leye without weapons, but the use of Legacy Mode helps.

You can visit the Makeover Mage to change your character's gender to female, if it isn't already.

If you are a male character, exit through the portal and change your character's gender to female. Low-level players may die to Sir Leye while being any gender, as dying wont reset your quest progress. Enter the testing rooms again through Sir Tiffy Cashien and continue testing. Complete 5 tests in a row to complete the quest. 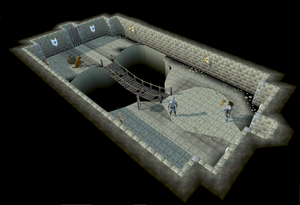 Right next to Sir Spishyus you'll see a 5 kg chicken, a 5 kg bag of grain, and a 5 kg fox. You must get all 3 of them across a bridge that only supports 5 kilograms in one go. The tricky part is that if you leave the fox and chicken alone, the fox will eat the chicken. The chicken will also eat the bag of grain if the two of them are left alone. Be sure you wield (take) the item/animal before dropping another. 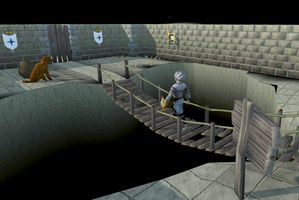 A player wielding the chicken.

Once you complete the puzzle, the door now unlocks and you can proceed to the next puzzle via the portal.

Speaking to Miss Cheevers, you see that to pass this room, you need to make a duplicate key to unlock the final door. She reminds you that there are limited resources, and that if you mess up, you need to leave the room and start all over again.

There are two doors that you must get through. The first door is missing a handle, while the second one is locked. Firstly, search all of the bookcases and crates in the room to find the following items: 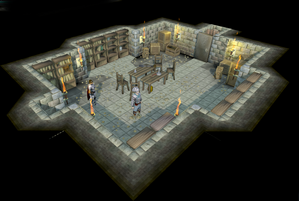 You may also find nitrous oxide, sodium chloride, acetic acid, shears, and a magnet, but these serve no purpose. If a player mixes two wrong substances, it creates a useless mixture (??? mixture). You can't get some of the substances back if you mess up so make it count and pay attention to details! 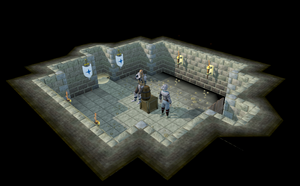 When you talk to Sir Ren Itchood, he will speak in riddles, the answer to which is a four letter word, made up of the first letter of each line of his riddle. Use the answer to unlock the combination lock on the next door. The possible solutions are: BITE, FISH, LAST, MEAT, RAIN or TIME.

Ms. Hynn Terprett will give you a multiple choice riddle. There are many to choose from - Here are all the riddles and answers: 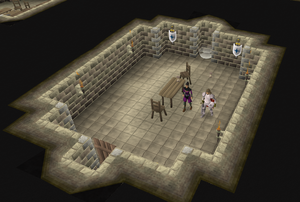 After entering Sir Tinley's room, talk to him and then simply stand still until he speaks to you; it may take a while before he does finally talk to you. If you move, or do anything while you're waiting, you will fail the task. Patience is the key to success. 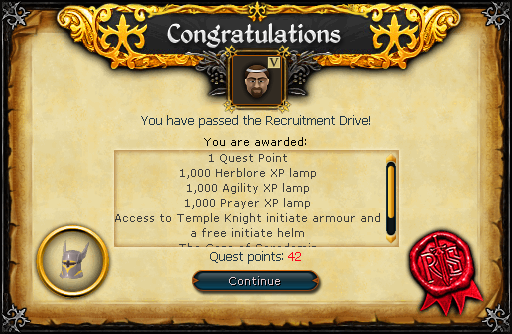 Recruitment Drive is directly required for the following quests/miniquests: