The Recruit a Friend or Refer a Friend programme is a feature introduced on 18 August 2011. Players who participate in the programme invite a friend to join RuneScape, rewarding both the invitee and the friend with experience multipliers and a week of free membership (with some qualifications).

How it works[edit | edit source] 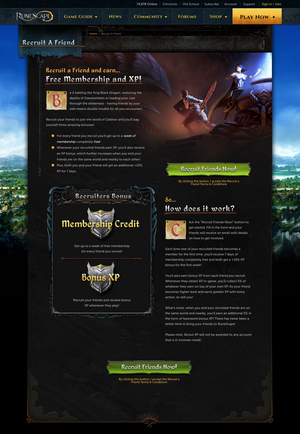 The invited player will receive a starter pack along with a bonus that allows them to get a 10% modifier for the first week of play time, this in addition to the 10% XP scroll that can be activated when the player so desires.

If this player subscribes to RuneScape within two weeks of being invited, the recruiter will gain a raf xp boost scroll, activating the scroll will grant 10% experience bonus for one week. The minimum subscription length is 1 month, which either has to be purchased with real money or the usage of at least 2 bonds. As of 11 December 2012, the following are also granted to the recruiter:

Both above bonuses only apply to one skill at a time, the one the recruited player is currently training. 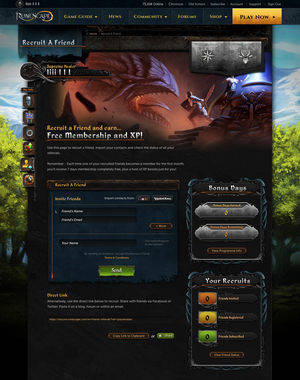 Recruit a Friend does stack with outfits, but does not work on reward XP such as from opening ancient effigies or a dragonkin lamp.

The starter pack consists of a mystery cracker that can be pulled with any player, giving the new player:

The announcement was met with overwhelming negative reception on the forums as players accused Jagex of real-world trading, as players can gain the bonus experience by buying membership for an alternate account rather than a friend. Complaints were similar to that of the Flagstaff of Festivities and the Members Loyalty Programme. Another much-used argument is that the programme will be massively abused by bot accounts.

The controversy that Jagex is breaking its own "real world trading" rule spread to a riot on members World 66 and also free-to-play World 73. As is the norm in past riots players spammed and chanted sayings such as, "We pay we say", "Ban the bots!", or "Welcome to BotScape" and generally did anything they could to add to the chaos. A popular way to add to the chaos was by setting up cannons and summoning large familiars such as titans, thus creating large amounts of lag on slower computers. Many players also planted flowers and put on overhead prayers such as Smite and Wrath to show their anger. There has also been massive spamming on the forums with over 50 pages of threads being locked, many players referring to a past quote by Mark Gerhard in their arguments against the programme. There are 1542 pages in the official thread, almost all of the posts are rants.