To save the dwarf, you will need a special dwarven rock cake. Only his father in the tunnel under White Wolf Mountain knows how to make one.

Inspect the Mountain dwarf in the banquet hall in Lumbridge Castle. Aris tells you to find his father in the mountain tunnel he guards and that rock cakes are the key to protecting the dwarf.

Before you leave Lumbridge and after you leave the time-frozen banquet hall, if you haven't obtained the items needed yet, go down the trapdoor next to the cook and buy from the bank chest (right click, buy-food from chest) in the northeast corner of the cellar. The items you will need are a pot of flour, an egg, a bucket of milk, and a bowl of water. You can fill an empty bowl from the sink nearby.

Teleport to Falador, and head to the Rising Sun Inn, east of the west bank. Talk to Emily or Kaylee. Ask her what she can tell you about "dwarves and ale". She will offer to tell you the secret recipe for Asgoldian ale for the price of 200 coins (free with an activated ring of charos, for 100 coins and a plain pizza, or for 50 gold and a chocolate bar).

After paying her, she will tell you to add a gold coin to an Asgarnian ale to get an Asgoldian ale. Buy five Asgarnian ales from her, and then add coins per the secret recipe to get five Asgoldian ales. (To obtain coins from your Money Pouch, right-click the Price Checker and choose "Withdraw Money Pouch"). Now, go to the tunnel under White Wolf Mountain that you unlocked in the Fishing Contest. You can enter the tunnel from Taverley or Catherby. The Taverley entrance is found slightly south-west from the farming patch and Head Farmer Jones. The Catherby entrance is east of the farming allotment patches, through a large cave opening which is guarded by a dwarf. 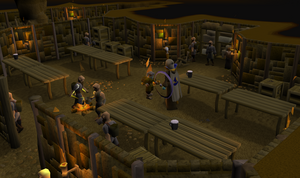 Look for an "Old Dwarf" (later named Rohak) in the bar area. Talk to him. He will refuse to give his recipe for Dwarven rock cake to you, but he will mention the Rising Sun Inn.

Put one gold coin in each of the ales. Speak to Rohak again. He will not help you if you don't give him all four Asgoldian ales (use them on him or speak to him); you'll know you've done it right when there's a brief fade-out accompanied by the statement, "Several beers later..." After he is sufficiently drunk, he will agree to make you a rock cake. It is, however, possible to fail. Use your fifth ale on him quickly after the fade-out lest he sober up.

Give him 100 coins, and then give him your bucket of milk, egg, flour, and a bowl of water and make sure you are wearing your gloves. Rohak will bake the rock cake and place it on the table. Pick it up while wearing gloves (spiked gauntlets also work): be quick because the rock cake will disappear quickly. If you are not fast enough that the rock cake disappears, you will need the ingredients for another.

It will still be very hot, so you need to cool the rock cake down before you can give it to the dwarf back in Lumbridge.

Ways to cool the Rock cake:

Head back to Lumbridge Castle, and make sure not to accidentally eat the rock cake. Right-click the cake and give it to the dwarf to complete this subquest. 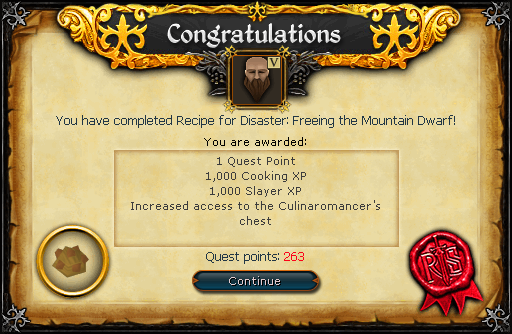 Recipe for Disaster: Freeing the Mountain Dwarf is directly required for the following quests/miniquests:

This information has been compiled as part of the update history project. Some updates may not be included - see here for how to help out!
Retrieved from ‘https://runescape.wiki/w/Recipe_for_Disaster:_Freeing_the_Mountain_Dwarf?oldid=35840967’
Categories:
Hidden category: