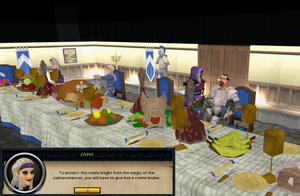 Inspect Sir Amik Varze in the banquet hall in Lumbridge Castle. Aris will tell you that to protect the knight from the magic of the Culinaromancer, you will need to feed him Creme brulee supreme. She recommends you talk with the cook next door for help with the recipe. She also suggests you speak with the Wise Old Man in Draynor about the Evil Chicken.

Talk to the cook. He will again tell about you defeating the Culinaromancer. You will ask how you defeated him and the cook will ask what part you didn't remember. Ask about Sir Amik Varze. He will tell you to mix milk with a pot of cream. Then add cornflour, a vanilla pod from the Kharazi Jungle, the egg of the Evil Chicken, and the cinnamon from a ground Dramen branch. Once you have combined the ingredients, flambé the dessert using a dragon somehow.

Here is how to make the brulee:

Finding the other ingredients[edit | edit source]

The location of the vanilla plants.

Head to the Kharazi Jungle. The Kharazi Jungle is located on the southern half of Karamja. You can use the Fairy ring code (CKR), or, if you have added the bittercap mushrooms to unlock it, the code (CJS), which circumvents the need to chop through the jungle. Head south across the bridge. Make sure you have your Radimus notes if you haven't completed the Legends' quest. To enter the jungle you have to cut the trees to get deeper into the dense wood, and bushes with your machete. Then go to the pool of water near the middle of the jungle. Once at the pool, go directly south-west to find Vanilla plants. Search a plant to get a vanilla pod. Add the pod to the cornflour mixture, and it becomes Brulee. 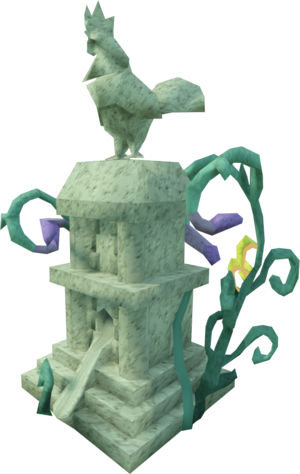 Make your way to Draynor Village and talk to the Wise Old Man. Choose the fourth option: "I'd just like to ask you something". Next, choose the Strange beasts option and then The Evil Chicken option. He will tell you about the "foul bird" and to look for it in the land of the fairies.

If you ask the Wise Old Man if there is anything you can do for him, he will give you a task to collect items for him. You must retrieve the requested items before the option to ask him about the Evil Chicken appears. If the option to ask about the evil chicken is not present, speak to the cook in Lumbridge about the saving "Sir Amik Varze" part of the quest, and the option will appear, granted you have assisted the Wise old Man. Alternatively, if you wish to skip fetching items for the Wise Old Man, you can search the nearby bookshelves in his home for the book on chickens, which will also let you enter the portal.

Enter the shed in Lumbridge Swamp with a dramen staff/lunar staff equipped if you haven't completed A Fairy Tale III - Battle at Ork's Rift, otherwise if you have completed the quest just use any fairy ring to get to Zanaris. Use a raw chicken on the Chicken Shrine and you will be teleported to the Evil Chicken's Lair. The shrine is right behind you after you enter the shed with your dramen or lunar staff and you are teleported to Zanaris. Alternatively, the shrine is north-east of the main fairy ring upon entering the fairy ring system.

If you are at any stage of Swan Song after the Wise Old Man has teleported to Piscatoris Colony, you will not be able to find him in Draynor Village until you have completed Swan Song. You can still access the Evil Chicken's Lair by finding the book on chickens.

Get whatever you think you'll need to kill the Evil Chicken (this could be prayer potions and high magic defence armour). Use your raw chicken on the shrine, then run past the black dragons to the Evil Chicken. Cannons are allowed in the lair. The chicken is level 77 and should not pose too much of a challenge to mid- to high-level players. 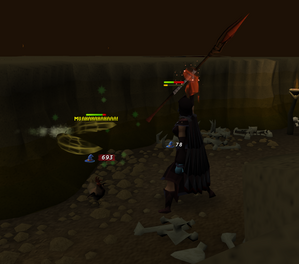 A player fighting the Evil Chicken.

If the Evil Chicken is not in the lair, go and talk to the Cook, and then try again.

It fights the same as it did during its random event fight (the Evil Chicken random event has now been discontinued), but it's a higher level. Kill the chicken and take the Evil chicken's egg, and add it to your brulee. You should also take the raw chicken if you wish to return, or you can kill a black dragon on your way out and take the token with you, so you don't have to return. Just don't "rub" the token yet.

Grind a Dramen branch into cinnamon with your pestle and mortar (using the 'craft' option). Add it to your brulee. A dramen branch can be gained in the dungeon under Entrana by cutting down the dramen tree. Considering the fact you cannot bring hatchets as they are classed as weapons, except on the tool belt, the zombies in the dungeon drop a hatchet to cut the dramen tree down with if you don't have one in your belt. After going into the dungeon, run by the zombies. Stop before the demons and wait for them to be opposite the dramen tree, then run in. Cut a branch off the dramen tree. As you exit the cave, on the right (past the demons), is a magical door (that can be seen). Wait for the demons to move, right click on opening the door. After a magic transfer you end up in Draynor behind the bank next to the altar. This teleport used to lead to deep wilderness, but it was changed later so it is not as dangerous to leave the dungeon anymore. 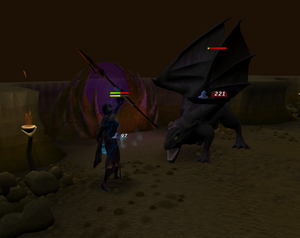 The dragon will drop a dragon token; be sure to pick it up before you leave. Escape the lair, put your anti-dragon shield on or take a dose of super anti-fire, and rub the token inside Zanaris or Lumbridge. Ice gloves are not required for this part; however, you will take 20-50 damage from the fairy dragon if you do not equip them. 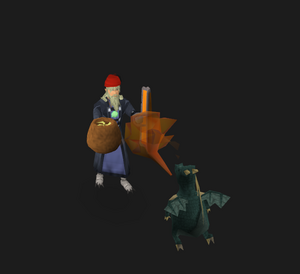 A player getting their brulee flambeed.

A fairy dragon will appear. Request that the dragon flambé your brulee to make it a creme brulee supreme (the finished brulee is called only a "Brulee supreme" in inventory). Players may wish to use the other options while talking to the fairy dragon. Doing so will not result in losing the dragon token. Choosing the option "Could I just keep your token for when I really need it, please?" will result in being teleported back to the location where you rubbed the token, and you will keep the token in your inventory.

Head back to Lumbridge Castle and use the brulee on Sir Amik Varze to protect him and to complete this subquest. 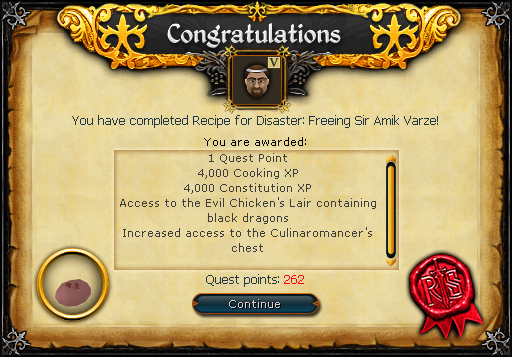