From the RuneScape Wiki, the wiki for all things RuneScape
Jump to navigation Jump to search
The Old School RuneScape Wiki also has an article on: osrsw:Recipe for Disaster/Freeing Pirate Pete 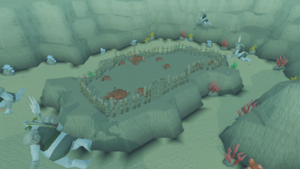 Nung and other Mogre guards swim near the crab pen.

Inspect Pirate Pete in the banquet hall in Lumbridge Castle. Aris says that to immunise Pirate Pete from the Culinaromancer's attack, you will need to feed him fishcakes. She suggests you talk to the cook.

Talk to the cook in the kitchen outside the banquet hall. He will tell you the fishcake recipe calls for ground cod, breadcrumbs, ground crab meat, and ground kelp. If you are below level 62 Cooking, you may burn the fishcakes required to finish the subquest, so you might want to bring extra ingredients. He will say that Murphy in Port Khazard will help you get the crab meat and kelp. Make sure you ask the cook about the crab meat before going to Port Khazard, or Murphy won't talk to you about crab cakes.

Make sure you are not carrying more than 27 kg of equipment, bank any pets or summoning pouches you have on you, (you won't be able to dive carrying any animal or summoning pouch, something to do with animal cruelty...) and head over to the docks of Port Khazard. There are a number of ways to get there, including:

Find Murphy and ask him about giant crabs. He will tell you he can create breathing gear if you have a fishbowl. He can then take you diving for crab and kelp. 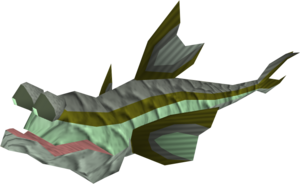 With a fishbowl in your inventory, talk to Murphy again to get your fishbowl made into a diving apparatus. Put on the fishbowl helmet and diving apparatus, and then ask to go diving. Your weight must be under 27 kilograms (diving apparatus and fishbowl helmet weigh 5 kg together, leaving 12 kg for your items) (there's a bank deposit box near Murphy), but keep your needle and bronze wire. Boots of lightness from the Temple of Ikov Quest may be used to lower your weight further, along with Wicked robes top and legs. Spotted and Spottier capes cannot be equipped as the diving apparatus must be worn.

For lower-levelled players, food and a weapon are essential, as the mudskippers hit fairly hard for their level. Capes and helmets cannot be equipped underwater.

There appears to be a glitch where if you have an aura activated when you enter and it depletes while you are swimming, you will start to walk/run rather than swim. This can also happen if you log out and then back in while underwater.

Once you're underwater, find a tall green plant—kelp—and pick it. Then swim north to a crab pen. Once, there, you will see Mogre Guards. Talk to the one named Nung. Tell him you want one of the big crabs, and he will tell you to get him five mudskipper hides.

Swim west to the entrance to the Mudskippers' cave, on the western wall of the underwater area. Pick up five rocks near the underwater cavern entrance, and then enter the cavern. While in the cavern (and the crab pen thereafter), players will be able to wield weapons as normal, as you will be standing upright. Kill five mudskippers (level 33 and 35) to get hides.

Exit the cavern, and take the hides back to Nung. Talk to him, give him the needle and three bronze wires, and then open the pen door. Kill a crab to get the Crab meat. (Be sure to bring the needle and the wire with you: It is not possible to take the mudskipper hides above the surface of the water!) Players may also want to get extra meat because you may burn the food when prepared later.

Leave the pen, swim south, and climb up the anchor (look for the little anchor). You may teleport from inside the crab pen if you prefer; however, should you choose to exit the crab pen, you should exit the area via the nearby Anchor. Teleporting out may not advance the quest.

Return to the kitchen in Lumbridge Castle. Prepare your ingredients:

Now talk to the cook again. Make your way through the conversation to the Protecting the Pirate option. The cook will tell you he now knows how to make fishcakes.

Use the ingredients on each other to create a raw fishcake, and cook it to get a cooked fishcake. Enter the banquet hall, and give (do not eat it!) the fishcake to Pirate Pete in the dining room for your reward. 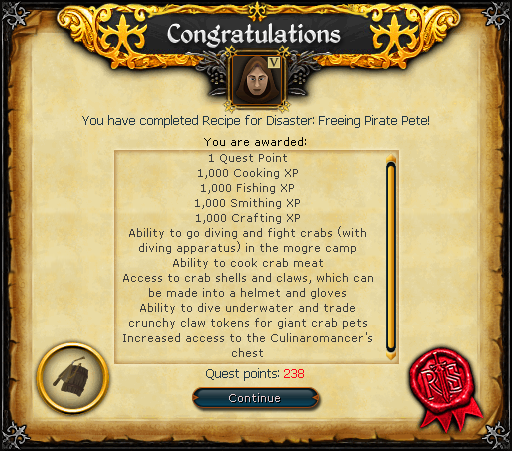 Recipe for Disaster: Freeing Pirate Pete is directly required for the following quests/miniquests:

This information has been compiled as part of the update history project. Some updates may not be included - see here for how to help out!
Retrieved from ‘https://runescape.wiki/w/Recipe_for_Disaster:_Freeing_Pirate_Pete?oldid=35851421’
Categories:
Hidden categories: