To complete this subquest, you need to make three monkey greegrees to transform into three monkeys. Remember what Zooknock told you at the end of Monkey Madness: you create greegrees by bringing him the bones of the type of monkey you want to become and a monkey talisman. He is located at the very end of the Ape Atoll Dungeon.

You need one talisman for each greegree you wish to make. Simply keep talking to the child to get more.

You need the bones of:

If you have a bonecrusher, make sure it is not crushing monkey bones.

Inspect Awowogei in the banquet hall in Lumbridge Castle. Aris will say you need to feed the monkey king his favourite dish. She, however, is not sure what his favourite dish is and suggests you ask him on Ape Atoll.

To the Atoll[edit | edit source]

On Ape Atoll, there are banana trees in the monkey aunt and uncle's house. Otherwise go to Solihib's Food Stall west of the temple. Solihib will sell you a banana for 2 coins and monkey nuts for 3 coins.

Go to Awowogei's palace in Marim on Ape Atoll. Make sure you have equipped one of your monkey greegrees and your monkeyspeak amulet. Talk to the Elder Guard blocking the entrance to let you through. Talk with Awowogei about his favourite dish, and he will tell you he cannot let you have sensitive information like that. But he will mention three monkeys.

You will find Mizaru, Kikazaru, and Iwazaru in the Temple of Marimbo north of the palace. Talk to any of the three monkeys in the north-west part of the temple. After a bit of conversation, you tell Mizaru that you are planning a surprise party for the king. Mizaru will then tell you to stuff the corpse of a big snake with banana slices and monkey nut paste. He will mention the snakes in question can be found on an island nearby.

Do not slice the banana or grind the nuts yet though.

With the banana and monkey nuts in hand, talk to the monkeys again. Iwazaru will indicate that you have the wrong type of banana. The three will say you need a red banana and mention a tree of them can found on the west side of the island, but don't leave yet...

Talk to them a third time. Iwazaru will now indicate that you have the wrong kind of monkey nuts. They will tell you to find tchiki monkey nuts on the tchiki nut bush in a cave in the hills south of the village.

The three ingredients can be collected in any order now. It is not necessary to return to the wise monkeys anymore for the quest, and you don't want to with your ingredients in hand. They will gladly eat any of the special nuts or bananas you have with you. Also, because you may burn prepared snakes or accidentally eat ingredients or the finished dish, it is suggested to get several of each snake corpse, red banana slices and tchiki nut paste. 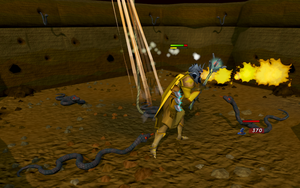 Travel back to Crash Island, and go east from Lumdo to find a pit. Before climbing down into the pit, players with lower combat stats may wish to turn on the Protect from Melee prayer, as the five level 64 Big Snakes can multi-attack, draining your life points quickly and poisoning you.

Enter the pit, and kill one of the big snakes which drop a snake corpse along with bones. Make sure that you stay away from the walls as more snakes will pop out of the walls to attack you. You may kill snakes and collect as many snake corpses as needed to protect from burning the raw stuffed snake or eating by mistake. Climb back up the rope in the centre of the pit to escape.

You need to take a regular banana to the three wise monkeys before the red banana will spawn. 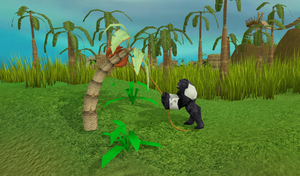 As the three monkeys directed, head west to the water's edge and find the red banana tree. This tree is directly west of the village centre, north of a pineapple plant. The leaves of the tree have a red-brown edge.

Wield the gorilla monkey greegree. It turns out the banana bunch must be brought to you and only gorillas have the strength. Use your rope on the tree to get the banana. If you forgot a rope, Ifaba's general store in the middle of the village sells them. Alternatively, rope can be retrieved for free by summoning Didymus the Lorehound if you have allocated 50 quest points to the pet track at May's Quest Caravan.

After you collect one, slice it with a knife (the tool belt works). You can't have more than one un-sliced banana without using the drop trick. Prepare as many sliced bananas as needed (at least two or three is good) to protect losing them from burning the dish or eating them. Remember not to return to the wise monkeys who will take any red bananas and all but one of your sliced bananas if you do. 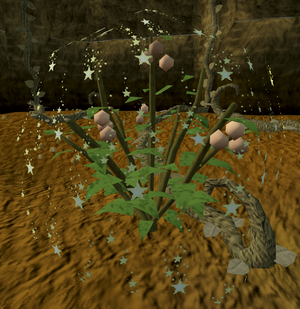 The wise monkeys mentioned that you need to go into hills to the south to get to the tchiki nut bush, referring to the agility course hill. Searching the bush in the hole before chatting with the [three] monkeys with some regular monkey nuts in hand, you would get a message saying, "There are no nuts on the bush right now."

After Iwazaru has described the tchiki nuts to you, head to the agility course over the bridge south of town. Wield your ninja monkey greegree, and enter the Ape Atoll Agility Course. Go across the obstacles until you find a hole (it is just after the rope swing). If you haven't already done so, you might want to unblock the log after the skull slope (for future, easier access to Ape Atoll via fairy rings).

Enter the hole and pick a monkey nut from the bush. Grind it with your pestle and mortar (the tool belt pestle works). You can collect another nut (you can only collect one monkey nut at a time, so using the drop trick and then grinding it is optional). It is a good idea to collect at least a third one, as there is a possibility of burning the stuffed snake or eating the paste by mistake.

Climb up the rope to exit the cavern, and climb down the tropical tree to complete the course. 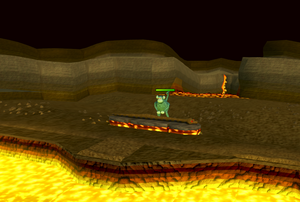 Cooking the snake.
Items needed: any zombie greegree
Items recommended: Cooking cape or Cooking gauntlets, a second greegree (as a zombie monkey, you will not be able to run), cooking boosts if you require them

The corpse cannot be eaten as is, so it's safest to use it first to mix the dish. Use the corpse on either the slices or the paste to create a raw stuffed snake. Once the snake or snakes are prepared, return to the Temple of Marimbo. It is not necessary, but you may talk to the three wise monkeys in the temple. Iwazaru indicates you need to enter the dungeon below the temple to cook the stuffed snake on lava-heated rocks.

Climb down the trapdoor in the east of the temple to enter the dungeon. Walk down one of the wooden platforms there, and look for a crack in the wall just below edge of the ledge west of the climbing rope; between the two platforms (it will say Enter Exit). Squeeze through the gap. Wield your zombie monkey greegree to walk across the hot coals. Then cook the raw stuffed snake on the long, hot rock to make stuffed snake. If you fail cooking this, you will receive a snake over-cooked. As such, it is advised to make multiple raw stuffed snakes.

Finally with the cooked stuffed snake, return to the Lumbridge Castle dining room and feed it to King Awowogei. Take caution not to eat the snake accidentally. If you removed your monkeyspeak amulet by now be sure to equip it beforehand. You will have a funny conversation forcing Awowogei to teach you the spell for teleporting to Ape Atoll. 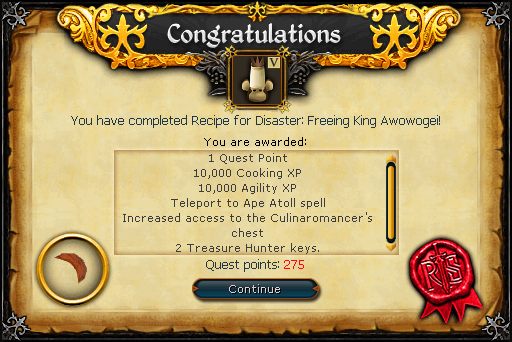