From the RuneScape Wiki, the wiki for all things RuneScape
(Redirected from Recipe for Disaster/Freeing Skrach Uglogwee)
Jump to: navigation, search

Freeing Skrach Uglogwee is a subquest of Recipe for Disaster.

To protect Skrach Uglogwee from the Culinaromancer, you need to feed him a cooked jubbly bird, the most delicious type of chompy in Feldip Hills. You need to talk to Rantz to learn how to get one.

Inspect Skrach Uglogwee in the banquet hall in Lumbridge Castle. Aris will say you can unfreeze him if you feed him jubbly chompy bird. She suggests, doubtfully, that Rantz in Feldip Hills may be able to help. Using your own cooked jubbly will not work.

Off to Feldip Hills[edit | edit source]

Follow the coastline south and then east from where you first talked to him, until you come to an old tree at the water's edge, near willow trees and a cabbage. Talk to Rantz, who will kick the old tree over and ask you to make it into a boat. Use your hatchet on it twice to make a crude boat (you have to trim the roots of the tree back and then hollow it out). Tell him the boat is ready, and he will shoot a steel brutal arrow to a tree on Karamja and tell you to cook a chompy "by da stabber!"

Make sure you have both raw chompies and logs before you go to Karamja. You can buy both items from the Grand Exchange. However, you can also kill some nearby chompies or chop logs from the willow tree adjacent to you.

Over to Karamja[edit | edit source]

The place of the tree 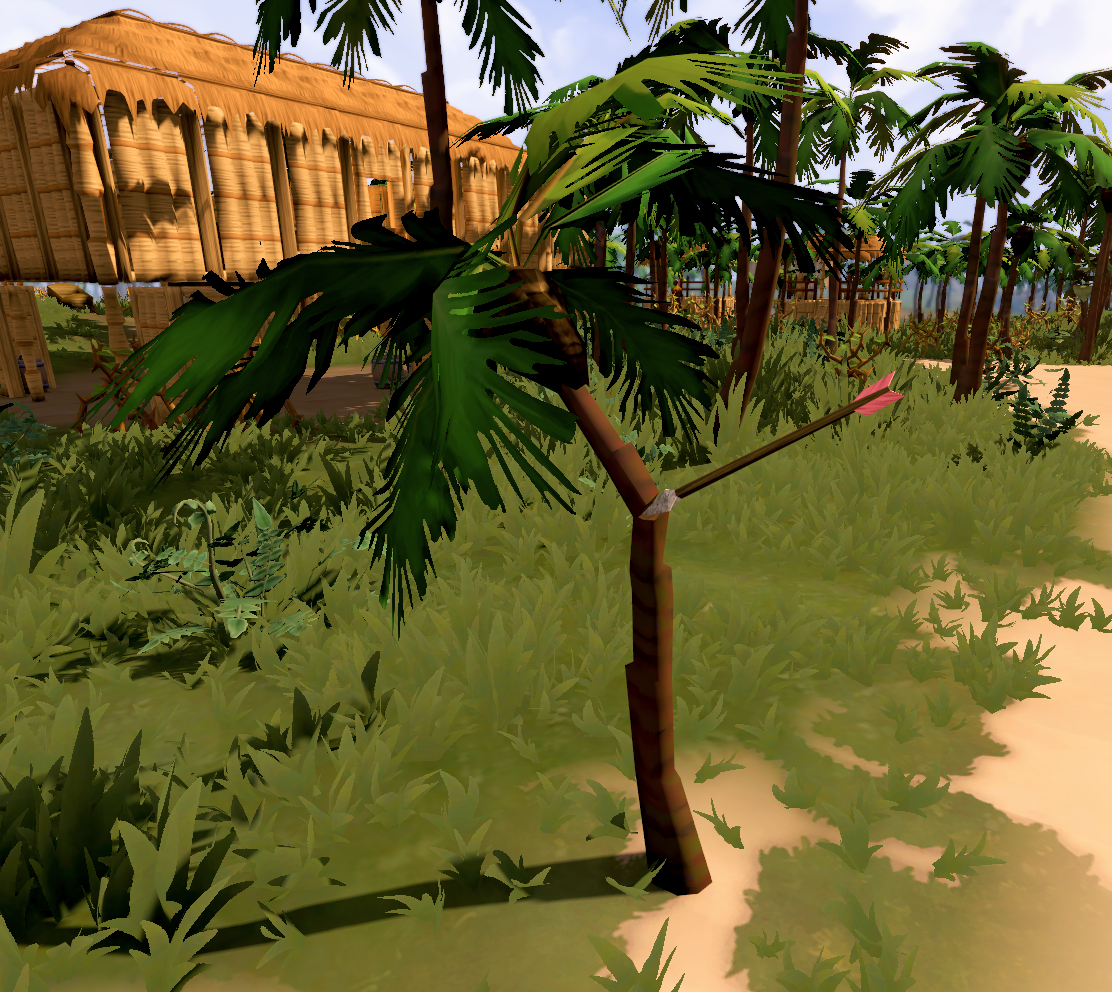 The palm tree with Rantz's arrow stuck in it

Travel to Karamja (quick ways to get there are fairy ring CKR, a Tai Bwo Wannai teleport scroll, and the Karamja lodestone). Head to the coast just north-west of Tai Bwo Wannai village and south-west of the general store, and search along the beach until you find a small palm tree with an ogre arrow in it, marked with a transportation symbol on the minimap. Make a fire under the palm tree, use your iron spit on a raw chompy, and cook the skewered chompy on the fire. If you succeed, Rantz's kids — Bugs and Fycie — will bring the boat and take you back to Rantz.

Back to Feldip Hills[edit | edit source]

Talk to Rantz again. He will tell you to make a balloon toad to use as bait:

Drop (not release) the balloon toad in an area south of Rantz's cave or in the area east of the gnome glider (if no bird spawns, try placing the toad by the blue flower in the grounds for catching the chompy in Big Chompy Bird Hunting), and wait for the jubbly (level 11). If it doesn't appear, you'll get your wool back, but you need another rock and will need to inflate a toad two times again.

When the jubbly appears, kill it with your ogre bow or comp ogre bow. Pluck it like a chompy, take the meat, and cook it on Rantz's spit outside his cave. It is possible to burn the jubbly meat (the Cooking skillcape perk does not prevent burning the jubbly).

Return to Lumbridge Castle, and give the cooked jubbly to Skrach (be sure not to eat it or you will have to get another one; there is confirmation if you want to eat the jubbly) to complete this part of the quest. 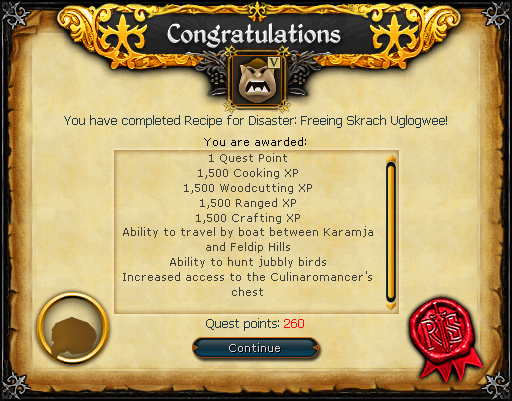 This information has been compiled as part of the update history project. Some updates may not be included - see here for how to help out!
Retrieved from ‘https://runescape.wiki/w/Recipe_for_Disaster:_Freeing_Skrach_Uglogwee?oldid=35521794’
Categories:
Hidden categories: