The Recipe Shop, which sells combination potion recipes, can be accessed by talking to Lady Meilyr or any Harmony pillar farmer in the Meilyr Clan district of Prifddinas. 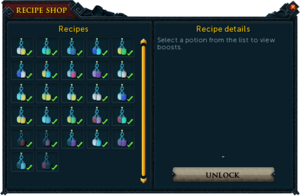