From the RuneScape Wiki, the wiki for all things RuneScape
Jump to navigation Jump to search
For the achievement, see Rebuilding Edgeville (achievement).

Rebuilding Edgeville is a miniquest that features the player assisting Mandrith in cleaning up Edgeville after it was attacked by the dragonkin during Ritual of the Mahjarrat, released six and a half years prior. 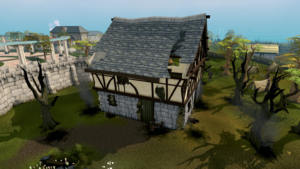 The aftermath of the dragonkin's attack on Edgeville.

Start the miniquest by speaking to Mandrith in the ruins south of the Edgeville bank. He will ask for your help repairing Edgeville of the damage from the dragonkin attack. If accepted, he will give you a To-Do list which can be read to see what still needs repairing. The tasks can be done in any order.

You can start by cleaning up the scorch marks, which requires use of Aggie's broom. The uncharged version is found against the wall in her house in Draynor Village. If Aggie notices the player taking the broom, they will be transfigured into a pig for a short while and scolded. The broom can only be successfully taken while Aggie is looking away from the player. The broom must be charged with 100 water runes before being usable. Once it has been charged, go to any of the scorch marks in Edgeville and sweep them with the broom. This must be done a total of four times. Each of these actions grants 12,500 Magic experience. The broomstick from Swept Away will not work. 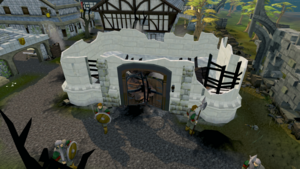 The guard building after the dragonkin's attack.

In order to fix the broken structures, first talk with Jeffery found east of the bank near his furnace. He will give you his hammer which can be used to fix the surrounding buildings. Each of the repairs grants 3,000 Construction experience. Six different buildings must be repaired:

Cleaning up the environment[edit | edit source]

Choose to either consecrate or desecrate the burnt skeleton directly north of the bank, leaning against the southern wall of the building. Either action grants 5,000 Prayer experience.

Clean up the fairy ring east of River Lum by using five bittercap mushrooms on it. This grants 10,000 Farming experience.

Clear the Destroyed Roof and Destroyed Wall found at the river, next to the fairy ring. Both of these will grant 5,000 Mining experience.

Nurture four burnt trees using a magic watering can (having one in the tool belt works). Each tree that is nurtured grants 2,500 Farming experience. Any four around Edgeville will work. If you chop down a burnt tree, the tree stump may be nurtured, becoming a regular tree stump which will in turn become a normal tree when it regrows, giving credit for one of the four trees nurtured.

Once all the tasks above have been completed, return to Mandrith to receive your reward.

This information has been compiled as part of the update history project. Some updates may not be included - see here for how to help out!
Retrieved from ‘https://runescape.wiki/w/Rebuilding_Edgeville?oldid=35827758’
Categories:
Hidden categories: