From the RuneScape Wiki, the wiki for all things RuneScape
Jump to navigation Jump to search
"RCW" redirects here. For other uses, see RCW (disambiguation).
Not to be confused with Clan Wars.

Rated Clan Wars is a clan-specific minigame added into the game on 12 April 2011, with the release of Clan Camp. It is available to both free players and members. It is lead by the Sergeant-at-Arms, who gives out the Rated Clan Wars badge which can be distributed to clanmates. Each player must have a badge in order to participate in a rated clan war. The leader can then challenge another clan and play.

Each clan may be between 10 and 500 players, and will have fixed rules which clan owners cannot change. Each battle will last between 10–120 minutes depending on how many participants are in a war. Players will not lose their items if they die.

The total kills performed by each clan are recorded, and at the end of each match, both clans are awarded points in the Clan Hiscores. If you continue to kill the same person you will get less kill points. 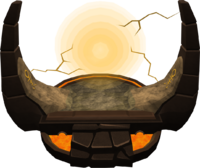 There are several methods to travel here, with the quickest being to use the teleport on the Clan Vexillum; this will place the player very close by to the west of the Sergeant-at-Arms. For members who do not wish to waste an inventory spot with a clan vexillum, they may use the West Falador bank, run almost directly south, and exit Falador via the under-wall the agility shortcut. Members' without the agility level can simply run to the normal Falador south exit. Free players who do not wish to waste an inventory space with a Vexillum, can also make use of the Falador west bank and run to the usual Falador south exit, or, if they are equipped with an Explorers Ring 3+, could cabbage port to just east of the Clan Camp.

Upon entering battle or dying, the bank menu will be brought up allowing players to withdraw food or equipment.

Similar to standard Clan Wars, when the two clans arrive in the arena they are separated from their opponent by a barrier that spans the middle of the battlefield. After a two minute countdown the barrier slowly lowers and combat begins.

This information has been compiled as part of the update history project. Some updates may not be included - see here for how to help out!
Retrieved from ‘https://runescape.wiki/w/Rated_Clan_Wars?oldid=35884408’
Categories:
Hidden categories: