From the RuneScape Wiki, the wiki for all things RuneScape
Jump to: navigation, search
Rat trap? (edit) 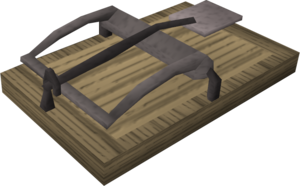 Rat traps were found near many of the Rat Pits. The player could attempt to pick up the traps, but doing so would also set off the trap and deal 30 damage to the player. If players used cheese with a rat trap, nearby rats could be killed. If poisoned cheese was used, a message appeared in the chat box calling it overkill.

They have mostly been removed due to the removal of the Rat Pits, but there is one still located inside Jimmy Dazzler's house.

A player getting hurt by a rat trap
Retrieved from ‘https://runescape.wiki/w/Rat_trap?oldid=26049288’
Category:
Hidden categories: