Rat Catchers is a quest in which you help various people with rat-related problems, whilst training your cat.

Items needed: Cat/kitten. (If kitten, bring some food for it)

Talk with Gertrude in her house west of Varrock, and request her assistance with your cat. She will tell you to speak to Phingspet and Grimesquit; two old women found just inside the Varrock Sewers, accessed via the manhole on the East side of Varrock, on the other side of the palace wall (east of the tree patch). They agree to show you tricks for your "fuzzy", but only if you can catch 8 rats with it.

This stage takes much longer if using a kitten. Be patient, as it can take up to 40 minutes to catch the 8 rats. Hell-rats do count for this.

To catch a rat, simply right click on your cat while it's not in your inventory, select "Interact" and then "Chase-Vermin". If there is no "Interact" option when you right click your cat you will need to un-tick "Hide familiar options" in the Gameplay settings menu > Skills & Experience > Summoning > Familiar Interaction > Hide familiar options. Note the options displayed by interacting using the Summoning medallion will NOT give the option to kill rats.

After the eight rats have been killed, return to the sisters. They will reveal that they can teach you little in the sewers, give you a rat pole, and redirect you to a wealthy business man in Ardougne, named Jimmy Dazzler.

Jimmy Dazzler can be found in a house west of the Flying Horse Inn, near the wall between West and East Ardougne (north west of the castle). He appears to be in a predicament, as he needs a house cleared of all rats; however, it has to be done in an unofficial capacity, so as not to tarnish his client's reputation. To do this, you will need to sneak around the house unnoticed, whilst avoiding guards, as they think you're an intruder. As the aforementioned house is located in dense woods, he gives you directions, so you don't get lost. Click the directions to proceed to the garden of the house. 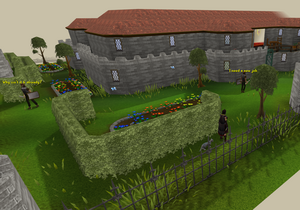 Evading the guards on the way into the mansion.

You will need to make sure you don't draw the guard's attention; note that guards will not notice your cat. Keeping run on is advised. 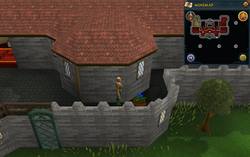 Hide by the potted plant. 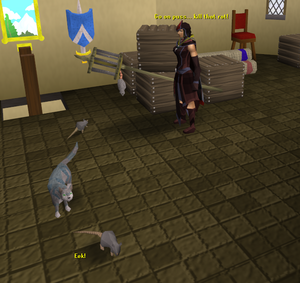 Catching the rats with your cat

If your cat gets stuck in the wrong room, you can use the 'Call' button from the summoning menu (

) to get it back into the same room with you.

Once you've caught all 6 rats, return to Jimmy Dazzler. He will praise you for doing his small favour. Your player will ask about training larger cats, and will be redirected to Hooknose Jack.

Items needed: Cat (overgrown cat will work when fighting the King Rat), 1 bucket of milk, 5-10 raw fish for your cat (even if you're using a fully grown cat), catspeak amulet (or cramulet after Do No Evil), 4 cheese, rat poison or the ingredients for it (vial, red spider eggs, and kwuarm), marrentill, unicorn horn dust. 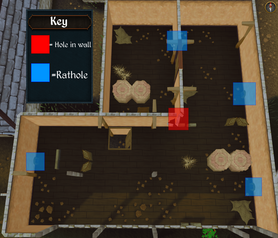 The locations of the Rat Holes

Hooknosed Jack can be found in the fenced-in area South-east of the Varrock East bank. He will tell you about the rat infestation in a warehouse nearby. You offer to help, to which he accepts, but only because his own kitten is trapped in the building. You now need rat poison; this can be obtained by giving him a vial, clean kwuarm & some red spider eggs. Use the rat poison on four pieces of cheese to create poisoned cheese. Proceed to the warehouse located south of the Dancing Donkey Inn, the building directly south of Hooknosed Jack. Go inside and climb to the top. Use your poisoned cheese on the four ratholes (pictured right) to poison them. Once you have placed the poisoned cheese, return to Jack.

Jack will tell you that his cat, Pox, ate some of the poisoned rats. Go to the Varrock apothecary located in the south-west corner of the city (directly south of the Western Varrock bank). He will ask for a cleaned marrentill herb, a unicorn horn dust, and a bucket of milk to make a special cat antipoison. Make sure you click through all the dialogue when he returns it to you, or you will need to make another dose. Then return to Jack to cure Pox.

Hooknosed Jack will then tell you that there is still one big and evil rat left. Return to the top of the warehouse. You'll see the King rat inside a room, but you will quickly find out you cannot reach him. 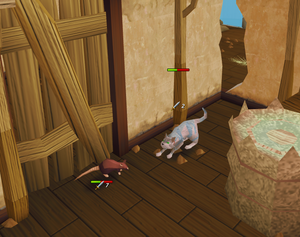 The cat and rat fight.

Pick up your cat and use it on the hole in wall (southern wall of the King rat's room two squares east of the ladder; lower part of the wall) to challenge the King rat. If your cat and the rat are located on the same square, run a bit north to un-trap it.

Make sure that you are not in a group, if you are in a group the King rat kill will not register and you will have to do the fight again by re-entering the area through the ladders. Heal your cat by using the raw food on the hole in the wall (not the cat itself). Your cat can die in this fight if you do not do so, and you will have to get a new one from Gertrude. If your cat dies, a spectral cat with wings will briefly appear, and you will receive the chatbox message: "Your cat has passed away".

If you happen to lose your cat by going down the ladder whilst your cat or kitten is fighting the King rat, logging out and logging back in should return it to you.

After the King rat is dead, return to Jack. Once again, your character will inquire about larger cats, to which he will redirect you to a dwarf. 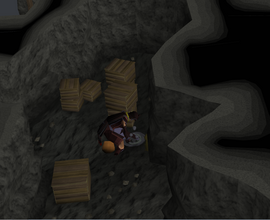 Smoking out the rats.

Go to Keldagrim. Information on travelling there can be found here. Locate Smokin' Joe in East Keldagrim, directly east of the pickaxe shop. He will tell you about a nearby rat problem. The only way to get the rats out is to smoke them out, but Smokin' Joe can't do it because he smoked too much smoke.

Offer to help. Use your weeds on your pot to make a pot of weeds, then light it and use the resulting smouldering pot on the rat hole to the right of him. Rats will come out the other side, and quickly go back in (if you have forgotten your pot, you can find one in the upper floor of the nearby bar to the south-west).

Try it again with your cat out (be sure you are wearing the catspeak amulet), and in the second attempt, it will offer to help you, stating you're doing it wrong. Accept and do it again. During a cutscene, your cat will catch the rats. Afterwards, talk to Smokin' Joe again and he will tell you about The Face.

If your cat disappears after the cutscene is over, logging out and logging back in will again return it to you.

The Face and Felkrash[edit | edit source]

Items needed: 300 coins (125 coins with a ring of charos (a))
Items recommended: Waterskins to avoid the desert heat, and a snake charm if you have completed The Feud

You can find The Face in Port Sarim, roaming directly north from the fishing shop. She will tell you to talk to Felkrash, who is standing nearby. Your character will inquire about teaching your cat, but she states that she will only help if you are able to kill all of the rats in Port Sarim at once, like she (claims she) did. Return to The Face. She will tell you Felkrash's story has more to it than Felkrash lets on, and to proceed to Badir the Snake Charmer, located in Pollnivneach.

Head to Pollnivneach in the desert south-east of Al Kharid. You can take a magic carpet ride directly there from Shantay Pass. Other quick ways to get to there are to use a ring of slaying to teleport to Sumona, use a Pollnivneach Teleport scroll, or break a Pollnivneach tablet after completion of Love Story.

You will find Badir the Snake Charmer to the south of the bar. Use one coin on his money pot to get his attention. Ask him about charming other animals and he will go on to tell you that he and Felkrash had a falling-out because of Felkrash's killing of animals. Try to persuade him with the wealth option - "What if I offered you some money?". He will offer to give you directions to kill the rats for exactly one more coin than you are carrying (unless you have fewer than 1,000 coins on you, in which case he will offer for 1,000 coins). Refuse to give him that much by choosing "Forget about it. I don't care", then select: "Walk away slowly" followed by "Stop". He will reluctantly give you a music scroll and snake charm for 100 coins. You can charm him with the ring of charos to lower his price to 50gp. 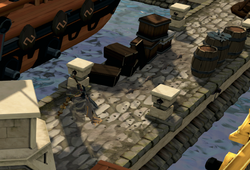 The rats jump off the dock 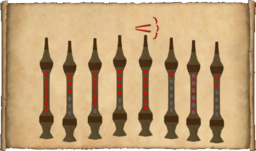 Get your snake charm from the bank if you do not already have it with you. Back in Port Sarim, stand beside Felkrash & read the music. Note that there are 8 notes (or positionings on the flute). Each note starting from the left corresponds to 1 page on the flute. You will only play one note per page. Jot down these notes / take a picture if need be. Now pick up the flute. Go to page 1 and select the matching note from the music. The red dots in the music scroll translate to the black dots on one of the flutes. When you hit the wrong one you can just correct it by selecting the right one. Then do page 2, etc.

Note that sometimes the "<" symbol is used to indicate a higher octave option (usually page 5). Select that icon when appropriate while playing. Also note that there are two flutes that have 2 holes covered, one with the top 2 holes covered, and one with the second and third holes covered. Make sure you select the correct one (for playing the last note (2), use the 5th flute).

You can go back to any pages you want to ensure you have them all correctly chosen (remember to move up an octave for the 5th note). When you are sure they are all correct (8 pages - 8 notes), click on the word "PLAY". If correct, you will be taken to a cutscene of you playing the flute and the rats jumping off the dock. Talk to Felkrash to complete the quest. Rat Catchers is not currently required for any quests or miniquests.