From the RuneScape Wiki, the wiki for all things RuneScape
(Redirected from Raptor)
Jump to: navigation, search
"Raptor" redirects here. For the pet, see Guthix raptor.
Loading...
RaptorPlayer-owned farm

The Raptor is one of the seven Signature Heroes, and is arguably the most mysterious; "Who are the Signature Heroes?" only describes the Raptor as a mysterious warrior. When speaking to The Raptor, he will comment on monsters killed by the player in quests, often stating his opinion on whether the feat is impressive or not.

The Raptor's race is currently unknown, and one piece of artwork of him has been released by Jagex with the website's Adventurer's Log. The Raptor seems to be very protective of his true identity, always appearing fully clad in armour and helm and refusing to take any of it off. This armour was defined as having been made by Xenia in the third episode of the Above the Lore podcast. The Raptor has been confirmed male by the game guide following the site's update.

Very little is known about The Raptor, even amongst the other Signature Heroes. He places great worth in combat prowess, often embarking on expeditions purely for the chance to fight stronger monsters, considering treasure and glory to be worthless.[1] He has great respect for those willing and capable of facing strong opponents, including the Pest Queen, the Mahjarrat Lucien, and himself.[1] However, he does not consider all strong monsters to be worthy of respect - slaying powerful dragons like Elvarg or demons like Nezikchened are unimpressive feats to him. His solution to any problem he encounters is to simply kill whatever is causing it,[2][3][4] and dislikes any solution that is not combat-related.[5] He is rather arrogant, believing himself to be unstoppable[6] and capable of surviving feats that nobody should survive.[7] His stubborn refusal to consider being a Slayer master causes Kuradal to remark that she hopes others do not end up like him.

The Raptor can often be found facing strong monsters such as lesser and greater demons and brutal green dragons. He rarely stays for long before moving onto the next foe. He appears to get bored easily, as during his brief tenure as a Slayer Master he could only stay in one location for a week before moving onto stronger foes. After a month, he abandoned his role as Slayer Master, stating that it was not what he expected and that he dislikes standing around doing nothing when there are challenging foes to hunt down.

The Raptor has a reputation as a fierce warrior, being feared and respected by many.[1][8] However, he appears to have little value for life.[9][10] 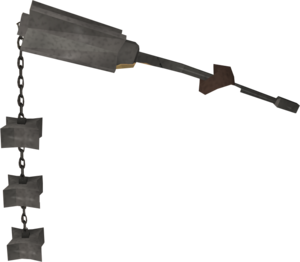 The Raptor is a strong warrior, capable of dealing 10,000 life points worth of damage to a brutal green dragon with his unique mace. He also has strong defensive capabilities, utilising his giant shield to withstand the fiery breath of the Queen Black Dragon and covering his comrades during troll attacks. He is a powerful slayer, being able to kill Acheron mammoths, Camel Warriors, Ripper Demons and wyverns. Kuradal, one of the most powerful Slayer Masters around, is in awe of him, initially refusing to give him a task as she should be his student, rather than the other way round.

Very little is known about the Raptor's life. His abilities in combat earned him a reputation as a fierce warrior. At one point, he allied himself with Ariane and Ozan to track down an artefact, only joining them to fight the demons guarding it. One of the workers at the Blue Moon Inn in Varrock saw the trio as they were resting and went to get his friends Jonty and Kherian, who was a huge admirer of the Raptor. When they made to leave the city, Kherian threw a snowball at the Raptor in a bid to catch his attention. He angrily demanded to know who the culprit was and ignored Ozan's attempts to peacefully leave. Kherian came up to him, extremely nervous. He demanded to know why Kherian had done so, and when the boy quoted him he left, satisfied.[1]

In year 169 of the Fifth Age, the Raptor heard of a strange affliction in the town of Rimmington. He met with Lucille, but his presence intimidated her into giving him a restless sleep potion to find the culprit. Another adventurer soon arrived, and Lucille gave them the potion to make sure the Raptor would not do anything rash. The Raptor was met by the adventurer, who warned them not to get in his way as he tried to find the witch.

As he followed the voice and the men's souls, they arrived at a large chasm, which he jumped into. He was swallowed by the Queen Black Dragon alongside the adventurer, but the two were separated. The Raptor easily fought his way through the beast's stomach, before finding the adventurer with the so-called "witch", Remora. The adventurer persuaded him not to kill her, as they would have no other way out. He begrudgingly spared Remora, but warned her not to try anything funny.

Remora instructed the adventurer to grab her crossbow to burst the cyst she was in, causing the Queen Black Dragon to spit the three out. Seeing that her dream was disturbed, she proceeded to unleash a barrage of dragonfire on the trio. The Raptor's shield easily guarded all three. Remora attempted to grab her necklace so they could teleport out, but was scorched to death. The adventurer grabbed her necklace and used it to teleport themselves and the Raptor away.

The Raptor proceeded to give the adventurer Remora's crossbow and some ammunition, claiming that he had no use for her weapon. He then showed excitement over killing the dragon, even if it would take him substantial time to do so. 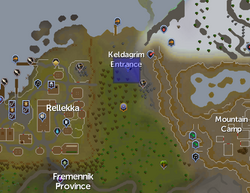 The Raptor's final location during his challenge.

During the month of November in 2015, The Raptor acted as a unique slayer master who gave separate assignments from a smaller list of potential monsters. He only gave one assignment per day. His assignments gave two times the normal amount of slayer experience per kill. He also had his own gem with which he could be contacted, similar to an enchanted gem.

The Raptor's appearance as a slayer master coincided with the release of four new slayer monsters throughout the month, with one released every week. Following each monster's release, it was possible that they would be received as one of the Raptor's assignments, with special rewards available through drops from the new monster.

After a while, the Raptor, disgusted by how a slayer master operates by simply telling people to kill whatever they asked and how these new opponents were terribly weak, stopped his challenges. He decided to look for even more challenging opponents but left his chest, the Raptor's chest of slaying, in Burthorpe for anyone who managed to complete his key. Soon afterwards, the chest was moved to War's Retreat.

The Raptor can be found in various places around Gielinor, but mainly in combat-related areas.

The Raptor can always be found standing on the first floor of the Legends' Guild.

The Raptor can be found fighting Troll chuckers in the Burthorpe troll cave. 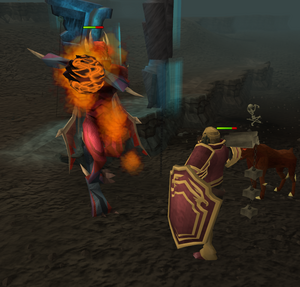 The Raptor will frequently appear in these places for a while (around 3-4 minutes), then teleport away. 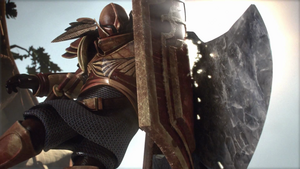 The Raptor in the cinematic trailer.

The Raptor appears in the RuneScape cinematic trailer that can be watched here. Along with Sir Owen, Ozan and Ariane, The Raptor fights against a gigantic troll, and narrowly saves Ozan from the brute's axe.

The Raptor occasionally appears at the Manor Farm, as Raptor (dragon expert). He may be sold dragons in exchange for beans. As a large-sized animal buyer, he will appear or renew his order for dragons every three days and purchase up to 6 animals before leaving, unless the player is at least 'Senior Master Farmer' rank in the farming reputation system; then he will buy up to 12.

Transcripts The Raptor speaks in:

The Raptor's menacing voice
I'm going to put an end to your witchcraft.

The Raptor making a threat
If you're here to stop me, then you have a problem.