From the RuneScape Wiki, the wiki for all things RuneScape
(Redirected from Ranging guild)
Jump to: navigation, search
The Old School RuneScape Wiki also has an article on: osrsw:Ranging Guild

The Ranging Guild is located just east of Hemenster and southwest of the Seers' Village lodestone. Level 40 Ranged is required to enter, though this can be boosted. The guild contains an archery competition and several shops, along with a tanner. Using this tanner is impractical however, given the distance from a bank. A combat bracelet can be used to teleport directly outside the Ranging Guild and is the fastest method of getting there.

The achievement Sniper Training from the Seers' Village achievements is done at the Ranging Guild. Enter the guild and go up the ladder in the middle of the guild. From the centre tower, and with a regular shieldbow, kill 1 Tower Archer at each of the 4 towers on the corners of the guild. They range in level from 14 to 56 (north tower: level 14, east: 28, south: 42, west: 56), so you may need to bring a few foods items to kill the level 42/56 guards, depending on your Ranged level. All 4 need to be killed in one go, so don't go back down the ladder until you've killed 1 at each tower.

This combat minigame requires a bow of any type and players attack the Tower Archers on the other platforms.

To start this minigame, climb up the ladder in the very centre of the guild.

There are four levels of difficulty, and the archers are aggressive and will attack players regardless of their combat level. Protect from Missiles prayer is highly recommended; this minigame is unsafe and players will lose items if they die.

Since the platforms are inaccessible, arrows shot can only be retrieved with Telekinetic Grab. The arrows shot here can also retrieved if the player has an ava's attractor, ava's accumulator, or ava's alerter equipped.

Players also stand a chance to pick up arrows shot by the Tower Archers. The arrows that may be received range in quality from iron to adamant.

Players attempting to do the medium Seers' Village Tasks should note that oak, willow, maple, yew, and magic shieldbows will not work - only the most basic shieldbow will. Also, once a tower is "recommended," the archers from the other towers disappear. Only the ones from the "recommended" tower will remain. Therefore, when attempting to kill one Archer from each tower, do not talk to the advisors (if you do so by mistake, simply go down the ladder and then climb back up). 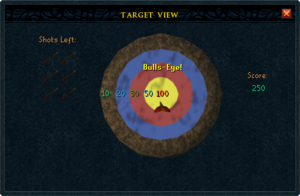 This minigame is called archery competition or target practice. In it, players can shoot targets and earn archery tickets, which can be used to buy rewards. The cost is 200 coins per game, including the entrance fee and the cost of the ten bronze arrows required to play the game.

Players are required to provide their own bow and may use the bronze arrows provided by the judge. Note: Players are not allowed to use arrows other than bronze. A player may equip 1,000 bronze arrows and play the minigame 100 times without the need to reequip any arrows.

Each time a player fires at the target, they will hit at one of the following places:

Any type of bow that can fire bronze arrows can be used. The tickets are given after completing the game (10 shots). Players can either speak to the Competition Judge or fire again at the target to get tickets. The number of tickets received is equivalent to the number of points received divided by 10.

Where you click on the target does not affect where the arrow hits the target, but your accuracy (and thus your score) is affected by the quality of your equipment, whether you are wearing armour, and your Ranged level. The Ticket Merchant at the ticket shop sells:

This minigame can be used to gain between 10k-60k Ranged experience per hour, but no Constitution experience. Bonus experience works here.

Logging out and back in allows you continue where you left off.

Dargaud sells arrow shafts, arrows and arrowheads up to and including runite.

The Tribal Weapons Salesman sells javelins and throwing axes up to rune.

The Ticket Merchant will trade in your Archery tickets for various items.

The leatherworker in the north-east section of the guild will tan various types of leathers for players, including dragon leathers and snakeskins.