From the RuneScape Wiki, the wiki for all things RuneScape
Jump to navigation Jump to search
The Old School RuneScape Wiki also has an article on: osrsw:Ramarno

Ramarno is one of very few Imcando dwarves to have survived the destruction of the Hall of Camdozaal in the early Fifth Age. Ramarno was one of the many dwarves living within the hall prior to the Runecrafting Crusades, during which a hostile Fremennik tribe waged war on both the human kingdoms and the Imcando dwarves.

Ramarno is blind, and wears a strip of cloth around his head. He is important in the Defender of Varrock quest. He will light The Sacred Forge (using the chant "Bron Uffon Afgi Bami"), allowing the player to see the vision of Zemouregal.

Claiming Smithing experience from Ramarno post Defender of Varrock is a requirement for the Master Quest Cape. This can be done by giving him a redberry pie.

Little is known of Ramarno's life, and virtually nothing can be definitively said of his earliest days. Ramarno was one of thousands of dwarves to have lived in Camdozaal, a subterranean hall found beneath the peak of Ice Mountain.

Ice Mountain, where the Imcando dwarves once thrived

Ramarno was presumably born in the early Fifth Age, during which the Imcando race was at its most vibrant. Camdozaal is a dwarven hall found beneath the northern mountain ranges of the region. The dwarves of the region had few enemies, the ever-growing Asgarnian nations having established a highly uneasy peace with the Imcando.

Ramarno is a Sage of Camdozaal, the elders of the hall had allowed him to be taught the ways of The Sacred Forge, an ancient furnace in which the dwarves could see visions of the future. Ramarno became adept at the use of now long-lost Imcando magic, as well as an advanced blacksmith even by dwarven standards.

From the years 42 to 62 of the Fifth Age, a violent offshoot of the Fremennik barbarian tribe launched a series of assaults upon Kandarin, Misthalin, and Asgarnia. Wanting to stop the use of runes, which they believed the tools of the gods alone, the Fremenniks waged war against all who used them. Led by the war chieftan Gunnar, the Fremenniks travelled south from the Fremennik Province and gradually spread their attacks over a devasatating 20-year period.

After moving on from Kandarin, the Fremenniks arrived in northern Asgarnia. Here they found the Imcando had been given nature and fire runes by the White Knights of Falador. Temporarily diverted, the Crusades were launched fully upon the dwarves.

The Fremenniks attacked Camodozaal from its main entrance, beginning the Battle of Camdozaal which resulted in a huge cave-in which buried most of the hall except for The Sacred Forge.

When Camdozaal's entrance collapsed, all inside were presumed dead. However, Ramarno and a handfull of other Imcando survived, and dedicated their lives to the upkeep of The Sacred Forge. Ramarno was severely injured during the battle, a massive shard of rock rending him blind near the conclusion. To cover his damaged features, he began to wear a white cloth bound about his head.

For over 100 years, Ramarno remained in the hall. The survivors fed on fish found in a north-flowing subterranean river, whilst the water was clean enough to drink as well. As time progressed, the remaining Imcando died of age, leaving Ramarno alone. 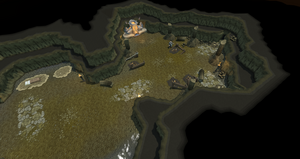 In the Year 169, during the Defender of Varrock quest, players re-discover Camdozaal with the help of Thurgo, an Imcando descendent of those that survived the Crusades. Here Ramarno aids the player by using his magics to activate The Sacred Forge, revealing that the Mahjarrat Zemouregal is once again attacking the Misthalin capital of Varrock.

Ramarno can be spoken to after the quest and will grant the player 1000 Smithing experience if given a redberry pie.