From the RuneScape Wiki, the wiki for all things RuneScape
(Redirected from Raksha)
Jump to navigation Jump to search
"Raksha" redirects here. For the item, see Raksha (Archaeology).
This article is about the boss. For other uses, see Raksha, the Shadow Colossus (disambiguation).
? (edit) 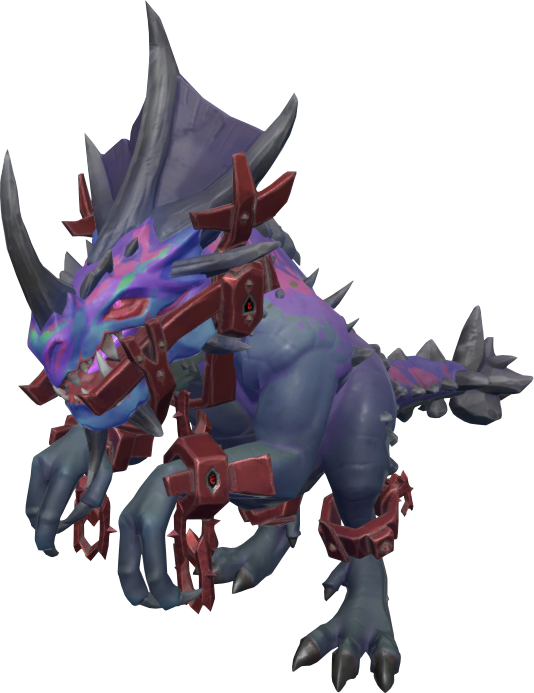 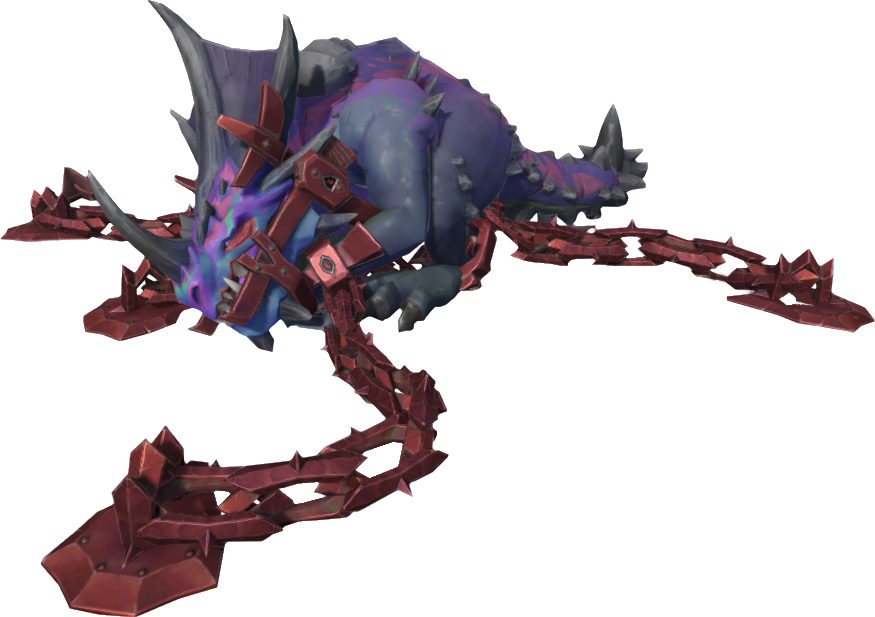 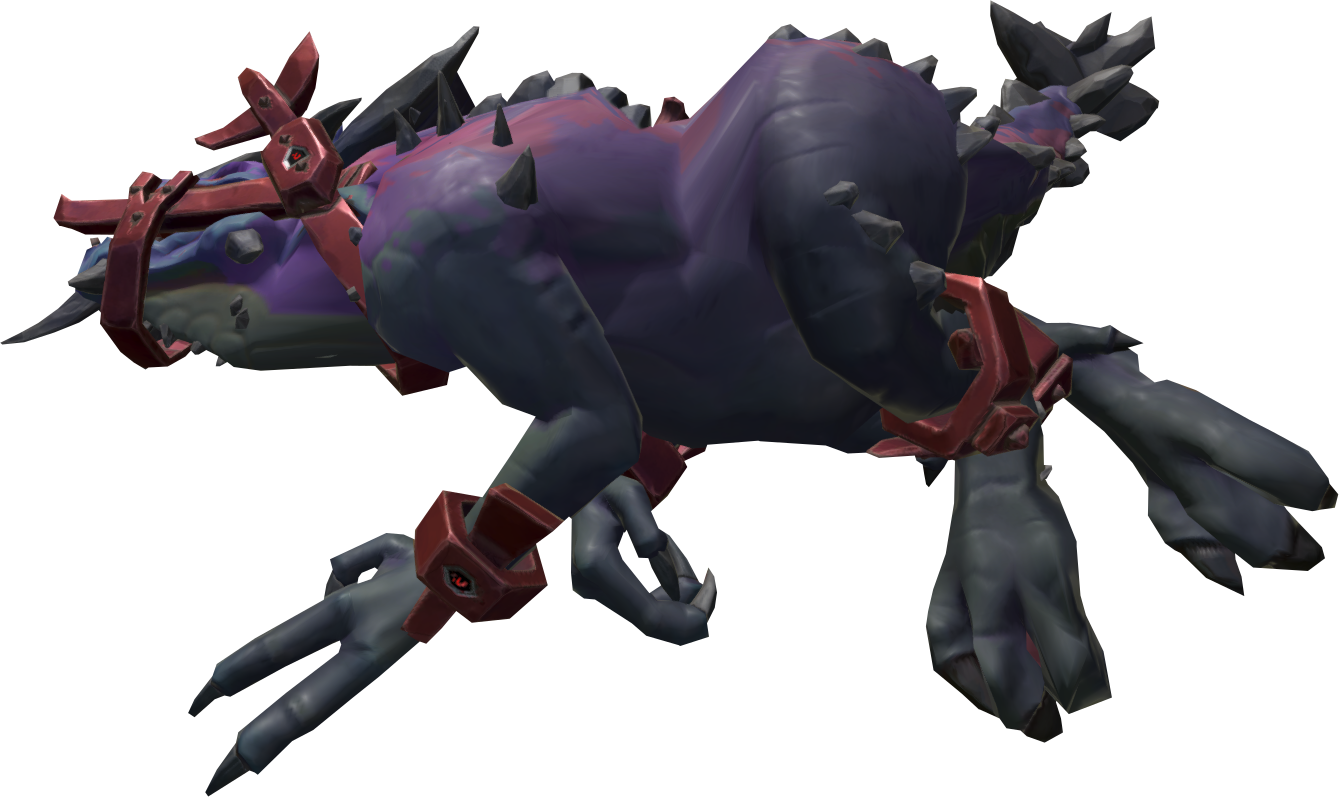 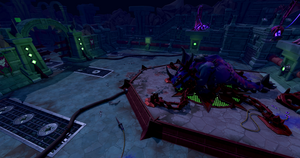 The fight takes place in the oubliette in which Raksha is imprisoned.

Raksha, the Shadow Colossus (also known as The One That Speaks, The One Above All, Hellebores rex and The Shadow Colossus of Orthen)[1][2] is an infamous rex dinosaur imprisoned in the Orthen Oubliette on Anachronia.

Raksha is a solo and duo boss. Kills in each mode are tracked separately but both are combined, similar to Elite Dungeons, for the purpose of the Final Boss title.[3] The boss itself is only able to be fought after completion of a short miniquest, with access to Anachronia being a prerequisite.[4]

Rewards for subduing Raksha include codices to enhance Ricochet and Chain, and a new defensive ability, Divert. Also dropped are laceration boots and blast diffusion boots, as well as the unique fleeting boots that allow the user to cast Rapid Fire while moving, alongside spikes to upgrade all three pairs from tier 80 to tier 90.

Obtaining all of Raksha's unique drops will unlock [Name] the Shackled title.

Fighting Raksha does not count for dinosaur slayer task and so there is no buff gained for using a Slayer helmet or Tuska's wrath. Similarly, the necklace of Salamancy does not provide any bonuses against him.

Raksha was previously a normal dinosaur and had lived on Gielinor well before the Stone of Jas was ever discovered. At some point, the creature stumbled upon the Codex, an elder artefact.[5] The monolith imbued him with immense amounts of shadow anima, turning it into a colossus.[5] However, the power did not come from the Elder Gods, but from somewhere else.[6]

This power caused Raksha to grow immensely large, intelligent and savage, being capable of communicating with others through visions. Raksha's hide was filled with venomous spikes that would instantly immobilise and swiftly kill prey, had an ice cold breath, and could generate electrical charges; it is unknown if these powers existed prior to anima infusion and were simply supercharged, or if they were entirely new mutations. Raksha eventually encountered the dragonkin when they began setting up outposts in the mainland - present-day Misthalin - which it attacked so brutally that only a handful of survivors lived to tell of it. Those survivors began to call the beast the Raksha, as it was something they had never seen before.[7]

Varanus, a dragonkin hunter of the Nodon faction, managed to trap Raksha. Angered at the dragonkin's victory, Raksha unleashed a vision of him giving Varanus a suffocating death, using the vision to his advantage by impaling Varanus with one of his spikes. Despite this, Varanus was able to live long enough that they ensured it could no longer harm his fellow kin. The Kindra Council later had Raksha transported to Orthen, imprisoned in a pen constructed by Nodon architects.

Deeply fascinated by Raksha, the dragonkin Kerapac began to thoroughly study the imprisoned dinosaur and its abilities, further restraining it with new security measures including a forced hibernation system.[8] Despite this, Raksha was occasionally able to break free of his forced hibernation, although the other security measures kept him in check. Kerapac was able to remove these traits from the Raksha and moved it to three female rexes, who became the earliest prototypes for the dragons. Kranon considered the Raksha to be the source of his religious inspiration after it projected a hateful vision to him.

The dragonkin Skeka also researched Raksha and considered putting her own mind into Raksha's body once the curse of the Stone of Jas started to act upon the dragonkin.[9] An agonised Skeka would eventually begin charging her device in order to throw her mind into the body of the Raksha. However this failed and she instead shattered her mind amongst a group of salamanders. 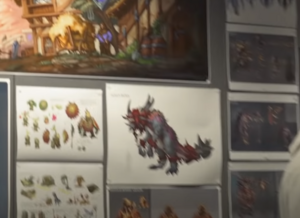 The first clue to the current whereabouts of Raksha was found on an inscription above the door, upstairs at the Anachronia Swamp Fortress a dragonkin text translating to 'Raksha'. It was apparently still alive, as the bars near Laniakea were bent in a way that when examined, suggests that something had tried to enter or escape. As Kerapac would have no reason to return to this specific fortress, it was most likely the Raksha's doing. Inside Xolo city is also a chain of dragon metal, which when examined states that it is moving, indicating it is one of the chains holding Raksha.

It is later revealed that Raksha had slipped into a coma for tens of thousands of years since it thrived on shadow anima, something which had not been produced in ages after the Elder Gods had destroyed Kerapac's device. Later, in the Sixth Age, Kerapac used the Needle to bring back a version of Anachronia that still had some supply of shadow anima; coupled with the "recreation" of his device, he produced a steady supply of shadow anima which awakened both Raksha and his Keeper, later revealed to be Varanus. Taking notice of this, Zaros entered the prison intending to collect a vat of shadow anima that was keeping Raksha in check. When the World Guardian arrived to investigate, Zaros took the vat despite Varanus' warnings, confident that the World Guardian could deal with the beast.

Raksha can be fought in the Orthen Oubliette in the south-eastern ruins of Orthen on Anachronia (near the Xolo City teleport) after completing the Raksha, the Shadow Colossus miniquest by speaking to Laniakea.

Raksha does not drop items upon defeat; rather, the Keeper will place an item in front of the security projector in the antechamber to be picked up. In duo encounters, each player receives their own reward. The drop rates between solo and duo mode are the same.[10] If no drop appears, it is due to an active drop cleaner, such as seedicide or spring cleaner 9001.

If this table is rolled, the item will appear alongside the main drop. 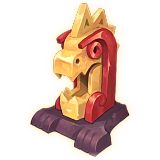 The lore behind Raksha was added to the game with the release of the Orthen Dig Site on 19 October 2020.

The following Archaeological transcripts directly mention Raksha: Rumours of the Raksha, The Greatest Hunt, Ethical Concerns, Raksha, The One Above All, Father of Dragons, Raksha Observations, and One... Voice....