From the RuneScape Wiki, the wiki for all things RuneScape
(Redirected from Raids)
Jump to navigation Jump to search
"Raids" redirects here. For other uses see Raids (disambiguation).

The Liberation of Mazcab is a raid, a high-level boss encounter designed for a group of ten players. It takes place on the world Mazcab, in a former goebie temple and the surrounding canals. The raid features two bosses: airut warrior Beastmaster Durzag and the corrupted water spirit Yakamaru are fought in the Pit of Trials and the nearby canals, respectively. A number of other enemies and a puzzle also appear. The bosses must be fought in order, unless all players in the group have already defeated the Beastmaster and solved the canal puzzle.

Liberation of Mazcab is the first and only raid added to RuneScape, and accessing it requires the use of the Grouping System to enter and being in the raid group.

The rewards from the encounters include teci, the currency used to purchase level 90 tank armour sets for all three combat styles and a number of ability codices, as well as achto versions of the armours, as well as pets. Obtaining all unique drops from Durzag and Yakamaru will unlock the title, [Name] the Liberator.

The Liberation of Mazcab features two bosses, Beastmaster Durzag and Yakamaru, who need to be defeated in order, as well as a canal puzzle section separating the encounters. The first fight and the maze can be bypassed provided all players in the group have previously reached the Yakamaru fight; otherwise the full raid needs to be completed in order to reach the second boss. On death gravestones appear in the Graveyard area although they can also sometimes appear closer to the instance entrance. One can easily run back in time and retrieve their items through the Bandit Camp lodestone.

Once the raid instance is created, players must jump down a platform into Durzag's arena and speak to the goebie there. After agreeing to help him, a number of Goebie prisoners will appear, followed by airut and chargers, and eventually Cormes. Players must kill 39 to progress to the next part of the raid. 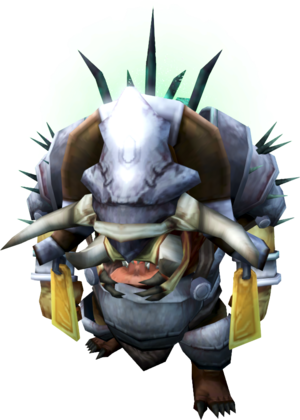 Beastmaster Durzag is an extremely powerful level 2,000 Airut accompanied by his two pets, Tuz and Krar. When his pets are next to Durzag, he will be able to deal more damage. Later in the fight, Durzag will release a number of chargers to attack players, but their numbers can be reduced by killing them earlier in the fight. Durzag has a number of other unique attacks, such as bombs.

After Durzag is defeated, players will need to find their way out of the arena by searching the cages where the chargers were when he appeared. It may take a few tries as players may be sent to another entrance as the player will be "lost" as a result. Once the correct entrance is found, all players will appear outside one pipe, with another one nearby leading to the canal. 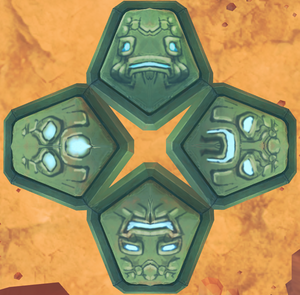 The Faces at the puzzle. North is taciturn face, east is angry face, south is happy face, west is shocked face

Players will then emerge in the canal. A goebie supplier can be found at both the entrance and the end of the canal after being unlocked with 500 reputation, allowing for players to rebank when needed. Players must then fight their way through jellyfish and solve a puzzle in order to reach Yakamaru.

The puzzle consists of a series of islands with blocked water spouts. The jellyfish that appear must be killed to unblock the spout, which will take you to the next skirmish. They are not aggressive. Having all players attacking one jellyfish at a time by avoiding the use of AoE ancient magicks or AoE abilities other than corruption shot and corruption blast makes killing the jellyfish much easier. Deploying dreadnips at the reflecting jellyfish can temporarily disable its reflecting damage, or having a player use the Zamorakian spear special attack can be helpful to entirely negate all of the reflecting damage. Having the whole team use both soul split and soul link helps spread out the damage and healing.

Once all jellyfish are killed, have four people from the group go back to the islands which had pressure pads. One player will hit the block by the southern bank, revealing a face. The players on the other islands must stand on the pad containing that face to unblock the canal, leading to the boss fight. A minimum of five players are needed to complete the puzzle unless one player can flip the block and immediately run to the closest island with the pressure pads. 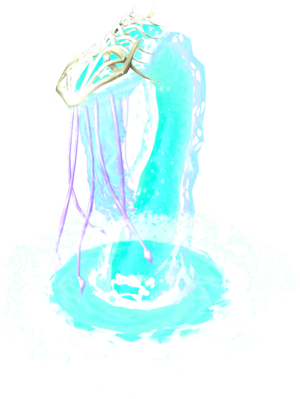 Yakamaru is a massive level 10,000 guardian spirit of Mazcab, corrupted by the powerful Airut Shaman to fight under their control. Yakamaru has a number of phases that each offer unique special attacks, along with summoning various jellyfish to aid it in battle.

Once Yakamaru has been defeated, players need to exit the area via a nearby whirlpool which appears once players can loot Yakamaru's corpse.

After being killed, Beastmaster Durzag and Yakamaru leave remains that can be looted for the drops listed on their respective pages; this uses the reward interface. If the player teleports out during or after the kill, or if the player dies during the fight but the encounter is successfully completed by the remainder of the team, the reward interface can be accessed by talking to Fetcher. This can also be used to maximise rolls on rare drops as described in the section below.

The current status of raid boss loot lockout can be viewed by talking to Fetcher, and the lockout can be reset from that interface. The lockout can also be made to reset automatically as of 19 August 2019. If a player uses the automatic reset option and kills Beastmaster Durzag but doesn't kill Yakamaru by the time the two daily resets happen, the lock will be automatically reset and the player will lose the possibility to kill and loot Yakamaru on that previous loot cycle. How many daily resets are left until the next loot is available can also be checked in the bosses page in the Beast tab in game, where "1 day" means the next daily reset, and "2 days" the one after that.

While being ineligible for actual loot, a player can continuously kill those bosses for chance at pet drop. Both Durzag's helmet and Yakamaru's helmet are dropped upon the bosses death, while Lil' Tuzzy is acquired by checking the loot after each kill by talking to Fetcher.

Unique rewards from the Liberation of Mazcab raid include level 90 tank equipment, Achto Teralith armour, Achto Tempest armour, Achto Primeval armour, as well as tradeable Mazcab ability codices and teci. The latter can be traded in the armoursmith's Raid Rewards shop for the non-Achto versions of the armour sets and specific ability codices.

The Achto armour sets share a similar effect to their inferior versions, along with the additional bonus of dealing extra damage depending on the tier of the shield or defender, and can be repaired with coins.

When a roll for an Achto armour drop from a boss is successful, the item dropped is determined by previously owned pieces and the style that the player dealt the most damage during the fight with. Wearing the armour or having it in backpack or bank in any of its variants (new, used, broken, augmented with charge, or augmented without charge) counts as owning it. The drop order from different bosses is as follows:

This means that a successful roll for an Achto armour drop yields the piece earlier in these lists if unowned, and it will be of the style used to deal most damage during the fight. The drop order takes priority; if dealing most damage with Magic and Achto Primeval boots are already owned but no other boots are, then a successful roll for an Achto armour drop from Beastmaster Durzag would yield either Achto Teralith boots or Achto Tempest boots at random. Once all the Achto armour pieces are owned, successful rolls yield a random armour piece.

Yakamaru has a better chance at rare drops than Beastmaster Durzag. And for this reason, a player can maximise the rolls on rare drops by utilising the reroll and the possibility to loot later by talking to Fetcher. To do this, a player should follow the listed steps:

If all Achto armour pieces are already owned, dropping a body armour piece can be done to force a successful roll rewarding another body worth more than the other pieces.

In addition, to typical kill count achievements, each Liberation of Mazcab boss has 5 unique achievements requiring to defeat the boss with special conditions. Once the Hero of the Goebies meta achievements is completed, the title [Name] the Daredevil is unlocked.

There are 26 achievements in this group.