Quiet Before the Swarm

From the RuneScape Wiki, the wiki for all things RuneScape
(Redirected from Quiet Before The Swarm)
Jump to navigation Jump to search
For the achievement, see Quiet Before the Swarm (achievement).

Quiet Before the Swarm is the first quest in the Void Knights Trilogy. It starts with the investigation of a void pest that has escaped to the mainland, but the situation soon gets out of hand.

The Void Knights fight tirelessly to contain the pest invasion and protect us all from a threat that could destroy all of RuneScape, but rumours of pest sightings on the mainland have reached the ears of the Temple Knights. Has a pest managed to slip past the Void Knights' defences?

Speak to Sir Tiffy Cashien to start the quest. He can be found sitting on a bench in Falador Park. He will tell you that a Pest may have escaped the Void Knights' Outpost. He wants you to interview the residents on the island to find out how it could have escaped. Go to the Void Knights' Outpost (via traveling by squire at Port Sarim Docks and travel by ship) and speak to Commodore Matthias. He can be found in the north-eastern part of the island in the north building. Though sceptical of the claim a pest escaped, he will tell you to speak to Captain Tyr to help in your investigation. Captain Tyr is to the south of Matthias' building, out in the open.

Captain Tyr will ask you to speak with nine of the residents on the east half of the island. All these people are close by in the immediate vicinity of Captain Tyr so you won't have to go far. The people you must speak with (not necessarily in order) are:

To remember which people you have already spoken with, view your quest journal.

You don't have to speak in depth with any of the people on the list. Simply initiating a conversation with any of them and choosing the option "That's all, thanks." will fulfil the requirement to talk to them. It's suggested you only do this if you're uninterested in the storyline as this will skip dialogue. 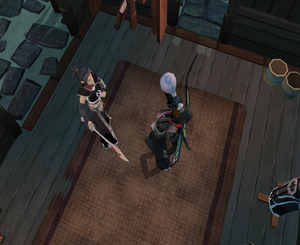 A player drinking the mind potion

After you have spoken to the residents, return to Captain Tyr. Captain Tyr will then ask you to single out a person who you think has committed a crime. The person that committed the crime is Jessika, the researcher, and the only one who does not interact with the locals. Talk to Jessika about the crime she has committed. She will act suspicious and attempt to deny that you have proof.

Go back to Captain Tyr and he will tell you he is also suspicious of Jessika. He tells you to report to Commodore Matthias with your findings. After talking to Commodore Matthias, he will bring in Jessika to be questioned. Finding her explanation to be inadequate, he will ask you to take a potion which will allow you to go into Jessika's mind and find the answers you need. 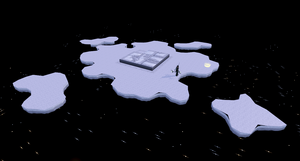 A player inside Jessika's mind

In Jessika's mind, you will have to solve a 3-by-3 slider puzzle. The trick is to put it together from top to bottom. It is easy to see what piece goes where, since when it is completely put together, it forms a square around the picture of the pest. This is made rather simple by the fact that there is an outside border on each tile - the empty space should be in the middle at the end.

If you need to restart, exit through the portal and repeat the cutscene of confronting Jessika

The puzzle is a picture of a random monster, always a 3x3 puzzle. It is suggested to start by solving one row/column then doing a perpendicular 2x1 grid, preferably around the borders.

For more help on solving these types of puzzles, refer to Treasure Trails/Guide/Puzzle boxes 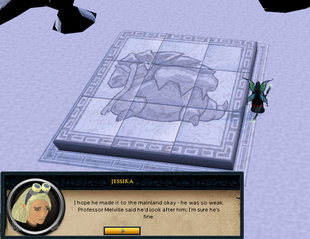 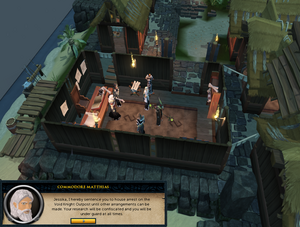 Jessika is found guilty and sentenced.

After completing the puzzle, you discover Jessika did release the Pest. You return from her mind to inform the Void Knights about it. Jessika is placed under house arrest and the Commodore calls a meeting of the highest ranked Knights to discuss what be done next. After the meeting, you are told to return to Sir Tiffy in Falador to report on the situation.

This is a good time to bank all your items so you don't have to do it for the next part of the quest.

After informing Sir Tiffy, he will go with you to the Docks at Port Sarim to await the Void Knights' arrival. You both arrive to find Commander Korasi alone in a stupor without the rest of the party present. Sir Tiffy tells Savant to get Lady Table to escort Korasi back to the Temple Knights' HQ. Tiffy brings you back to Falador and tells you to bank all your items (including familiars) before entering the HQ to see Korasi; bank your items, and return to Sir Tiffy, who will teleport you to the HQ. If you have already banked your items, you will go to the HQ from the docks right away.

Bridge and the sword[edit | edit source] 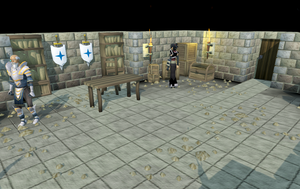 The HQ, where you enter Korasi's mind

This puzzle relates to the bridge and torch problem.

Logging out during the following portion of the quest will result in you returning to Falador Park, in front of Sir Tiffy. 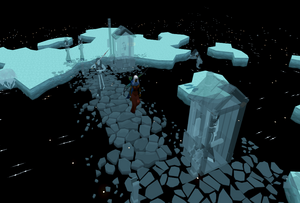 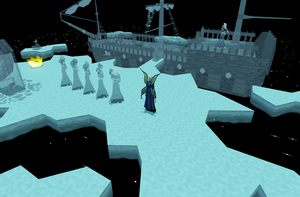 Upon being taken to the Temple Knights' HQ, you find yourself inside a small room with Sir Tiffy and Commander Korasi. (Opening the door just takes you back to Falador Park) Ask Korasi about what happened, but she won't remember anything useful. However, she still has some of the potion which you drank earlier to enter Jessika's mind. You tell her and Sir Tiffy you will use the potion to enter Korasi's mind to unlock her memories. After drinking the potion, you will find yourself inside a blue plane where you will need to complete a puzzle to advance.

The objective of the puzzle is to get all three knights as well as yourself across the bridge. However, there are a few limitations you must follow. The first requirement is that no more than two people can go across at a time. The second requirement is that when crossing, someone must be holding the sword. The third requirement is to make the crossing without collapsing the bridge. Each person weighs a different amount depending on how much Korasi remembers them. The bridge can only handle a total weight of 15. The player weighs 1, Bernard weighs 2, Ami weighs 5, and Diana weighs 8. If two characters cross, only the heaviest weight is counted. So if Ami went with Diana, the total weight would only be 8. Here is the solution:

After completing the bridge puzzle, you will find yourself next to a toll booth and with the five knights who were on the ship: Commodore Matthias, Korasi, Diana, Bernard and Ami. Each of them holds a hint as to where the other knights were, what they were thinking about, and what they saw at the time of the incident on the ship. To complete this puzzle, you must correctly assign each person his position, thoughts, and what he saw using the hints given by the other knights.

You will know when you have completed the task correctly when after assigning the last NPC, the task will end. The hints given are as follows:

Ami: "The Commodore was thinking about Jessika. He didn't see the shark or the seagull and he wasn't in the hold."

Bernard: "Ami was thinking about her sister while she was working in the rigging. Her sister, Diana, wasn't in the hold or at the helm."

Korasi: "Bernard saw the seaweed while he was on watch in the crow's nest. He wasn't thinking about a promotion or his sister."

Commodore: "The person on deck was thinking about fighting and she saw a seagull fly by. The person who saw clouds was at the helm."

The best way to solve such a riddle is to make a table, although the solution is provided below. 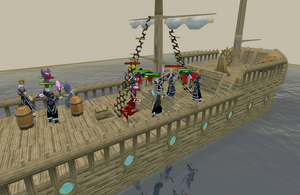 The massacre on the ship

After finishing the second puzzle, there is a cut-scene. You are Korasi, in the hold of the ship. (If you teleport or logout during the time on the ship, you will have to talk to Sir Tiffy again to get back to the Temple Knights HQ. Talk to Korasi and you will start from the beginning of the ship.) Upon seeing a Torcher, attack and kill it. After you finish killing it, proceed up the ladder onto the main deck. There, you see the other three knights and a squire fighting pests.

A Shifter stops you in your path, forcing you to kill it in order to continue. While killing it, the other knights die around you. After killing the Shifter, your character automatically heads up the ladder to the helm and finds Commodore Matthias fighting a Mysterious Figure. (Note: There is currently a bug that may cause Korasi to not automatically climb the ladder to the helm, leaving the game stuck until you reload the page. This can be fixed by turning your attack mode to auto-retaliate, have momentum and run off before drinking the mind potion that Korasi gives you. Also, standing near the bow of the ship or activating legacy mode before killing the shifter seem to help.) Using the last of his energy before he dies, he teleports Korasi to Port Sarim, ending the cut-scene. 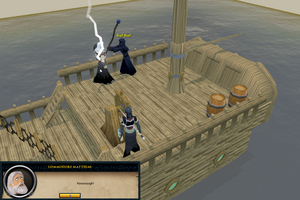 Once the cut-scene is over, talk to Korasi or Sir Tiffy Cashien, without a pet following you. Sir Tiffy will tell Korasi to report back to Captain Tyr at the Void Outpost. Korasi will ask you to do it for her and you accept. Travel back to the Void Outpost and speak to him. 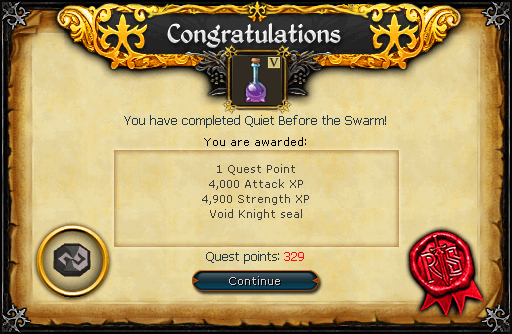 Quiet Before the Swarm is directly required for the following quests/miniquests:

Concept art for Quiet Before the Swarm
Retrieved from ‘https://runescape.wiki/w/Quiet_Before_the_Swarm?oldid=35746681’
Categories:
Hidden categories: