From the RuneScape Wiki, the wiki for all things RuneScape
Jump to: navigation, search
Quest kit (advanced)? (edit)

The Quest kit (advanced) was a reward from the Mobilising Armies minigame. It had the ability to turn into items that are commonly used in quests. This item was similar to the Rogue kit.

It could hold the following tools:

Converting your Morphic tool into a needle, pickaxe, or a knife did allow you to carry it in the Quest kit.

This item could be used for quests to save inventory space. Every time a game of Mobilising Armies was completed, the kit replaced any used or banked items. If you had a Quest kit (basic) or Quest kit (medium) when buying the Quest kit (advanced) the price will be reduced. 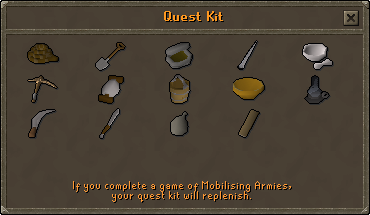