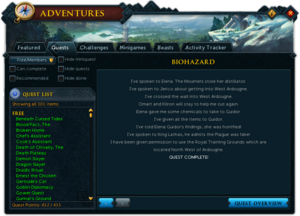 Miniquests, such as the The Curse of Zaros or the Mage Arena, do not give any quest points.