From the RuneScape Wiki, the wiki for all things RuneScape
Jump to: navigation, search
Queen's guard trousers? (edit)

The queen's guard trousers were introduced as a uncommon reward from the Squeal of Fortune. They are one of the five pieces of the Queen's Guard outfit. According to Jagex, it was only possible to win the pieces of this outfit, alongside the Dragon ceremonial outfit, "throughout the summer months." Once a particular piece had been won, it couldn't be obtained as a reward again.

When the entire set is complete, they can be recoloured when all five items are worn by right-clicking. This ability is also shared with the Dragon Ceremonial outfit. 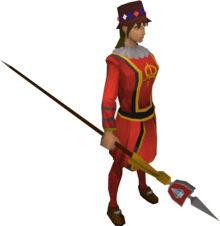 The update history project is a work-in-progress – not all updates to this topic may be covered below. See here for how to help out!
Retrieved from ‘https://runescape.wiki/w/Queen%27s_guard_trousers?oldid=33935047’
Categories:
Hidden categories: