PvP worlds (also known as Player-versus-Player worlds) were released on 15 October 2008. They allowed players to clash almost anywhere, except for certain safe areas like banks and respawn points. A few things that were removed after the wilderness removal of December 2007 now have been added back to the game, such as the spell Teleblock and death drops. High levelled players, or players confident in their ability, often went without armour to skilling areas, as the areas were usually empty, or less populated, hence less competition. PvP worlds were removed on 1 February 2011 by an update that brought the original Wilderness and unlimited trading prices back.

When logging into a PvP world, players were warned and given the option to return to the lobby to select another world.

Level range for a player with a Combat level of 96.

Any player within a particular level range of Combat level can be attacked. The range is calculated with this formula:

[Note that the result is always rounded down]

There were a number of "safe zones" within a PvP world where players were not allowed to attack one another. Some of these areas were as follows:

If a player ran into a safe zone while in combat, a 10-second countdown timer appeared. During this time, the player was safe from all players except the player(s) who triggered the timer. The timer would restart if the player goes out of a safe zone and returned whilst in combat. A common tactic was to run out while the other player is retaliating to restart the timer. According to Jagex, the countdown timer was used to prevent players from using "hit and run" tactics or "Rushing", although rushing was still a major part of PvP worlds.

"Safe" activities also allow player-versus player combat. Nevertheless, when a player is killed, the player loses nothing and will appear back at the start point.

These activities were closed for player-versus-player attacks.

There were certain areas in RuneScape called "hot zones". These places were considered very dangerous as they were popular for players to come and kill each other. Many of these areas had monsters as well. A "flaming skull" icon would appear on the screen to notify players when they enter these areas.

Hot zones gave players an advantage because there was a higher chance for killed opponents to drop better items in these areas, as opposed to killing players outside the hot zones. Hot zones were more dangerous, however, due to the larger number of players in these areas who would hunt you for the improved drops they could get.

Hot zones include, but are not limited to:

An update let players see how much drop potential they had acquired so far.

In a PVP world, as of 15 July 2009, all players start out with a skull (keeping forever while on a pvp world) and protect item prayers are disabled. This means that no matter what the circumstances are, when you die, you lose all of your items.

If a player managed to kill another player in combat, they would receive certain item drops from that player along with other possible PvP drops. The final drop consists of a mixture of the following items: Items the player had on them that they lost, consumables, most regular items that are not "boss monster drops" and Ancient artefacts.

Most of the time, the items dropped were normal items, such as weapons and armour from non-PvP worlds. However, in rare cases, special PvP-only drops such as Corrupt dragon equipment, and Brawling gloves would be dropped if the player you killed was risking a lot.

These are special items that can be obtained as drops from PvP worlds. All but a few other items in RuneScape can also be dropped more commonly and in greater numbers from these special PvP drops.

Corrupt dragon equipment have the same stats and boosts as normal dragon equipment, but have a limited amount of time to use (30 minutes), and are available to free-to-play players. They are an extremely rare drop, but you can improve your chances of getting this drop by increasing your EP. They can be bought and sold on the Grand Exchange, but only when unused.

There are 13 kinds of Brawling gloves. These gloves add experience to certain skills while training in PvP worlds. They provide as much as 400% bonus (additive) to experience, quadrupling the usual experience gained.

The Ancient Warriors' equipment all come in two states:

Sometimes, you will get ancient artefacts. These can be traded to Mandrith in Edgeville bank or Nastroth in Lumbridge castle for a set amount of coins. Free players can only get up to the Bandos Scrimshaw (50k), while Members can get everything.

(Most of the terms listed below do not apply to the PvP worlds as they are today, but as they were before getting skulled when logging into PvP/bounty worlds.)

On PvP worlds, there are a few general types of players: 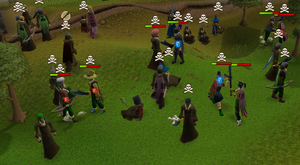 Many players had criticised the PvP worlds as a bad substitute to the old wilderness. Players risked a high monetary value of supplies, only to obtain drops worth a fraction of what opponents lose upon death as these are independent events. Raising drop potential also favours those who are not actively fighting in PvP worlds, as they would kill vastly more often than every 30 minutes if the value exchange (gained and lost) were to resemble the wilderness.

Some players argued player killing in a larger area makes up for the loss of profit for those skilled in player killing. The underlying reasons behind the change of mechanic on Jagex' part was one to prevent real world trading through the randomisation of drops, thus this argument seems arbitrary as Jagex did not announce they wished to limit the money-making aspect of pvp. It is further often mentioned that you can gain significantly more from a kill than the opponent loses, increasing the risk of "75king" as a form of real world trading. Many viewed this as evidence that Jagex had ulterior motives for their solution to the problem of compatibility of pvp and real world trading, specifically wanting a larger group of players to profit from pvping.

PvP Worlds were often criticised as a poor substitute to player killing in the old wilderness as you did not obtain what the person you killed was wearing. This made it difficult to obtain valuable drops. Furthermore, you had to wait hours to gain EP if you want a good drop, something which many players found frustrating.