From the RuneScape Wiki, the wiki for all things RuneScape
(Redirected from Punishment)
Jump to: navigation, search

The Consequences for abuse (more commonly called Punishments) refer collectively to the actions that Jagex may take against players who violate the Code of Conduct in the game or in the RuneScape Forums. Offences, their evidence and subsequent punishments can be viewed and appealed by players using the Account Status system.

Offences and punishments are tracked in the Account Status

A mute is a form of punishment given out by in-game Player Moderators or Jagex moderators (Customer Support team) to those players who are guilty of breaching the Code of Conduct. Mutes given out by Player Moderators last up to 48 hours, long enough for Jagex's Customer Support team to investigate the situation. A muted player will not be able to talk in-game or on the Forums, however, they can still play the game as usual and trade with other players. Muted players usually communicate with others by using emotes, Quick Chat or external forms of communication. 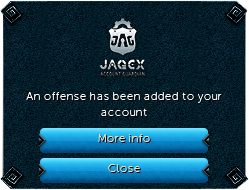 A message telling the player that an offense has been added to their account.

Game bans restrict players from access to their accounts, usually for repeated or severe violations of the Code of Conduct. If the player appeals their ban, it may be accepted, either restoring the account completely or with a permanent mute.

Bans from the RuneScape Forums are given out by Forum Moderators and Jagex Moderators for essentially similar reasons to those in-game; however, they also include flaming, spamming and other forum-specific rules. If a player is muted or banned from the game, they are also automatically banned from the Forums.