From the RuneScape Wiki, the wiki for all things RuneScape
Jump to: navigation, search
Punch? (edit)

Punch is a food released for 2011 Hallowe'en event. It seemingly has no use, and drinking it causes the player to say "Mmm, inky." It is handed out by Punchy the octopus.

It is also possible to teleport and keep Punch in your inventory. This is achievable by right-clicking and choosing Destroy right as your screen fades out, although the punch will disappear shortly after. 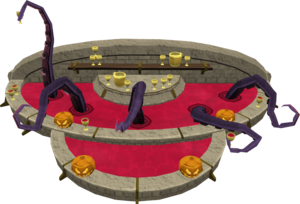 The punchbowl with the octopus in it.
Retrieved from ‘https://runescape.wiki/w/Punch_(item)?oldid=16307770’
Categories:
Hidden category: